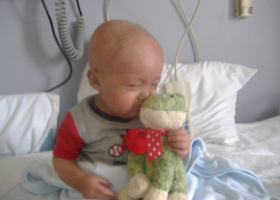 When Jennifer and her husband Scott of Holly, Michigan started a family, adopting a child was not part of their original plan. They were blessed to have a daughter Audra, now nine without any complications. But when Jennifer suffered from several miscarriages and the death of a baby girl who survived only one day after having to give birth 25 weeks into her pregnancy, the family started thinking that international adoption would be a viable option to welcome another child into their family.

In 2006, that wish became a reality when they adopted seven-month-old Alex from Guatemala. Alex appeared to be healthy. Because Jennifer did not know his medical history, she took him to her pediatrician a couple of days after they arrived home for a routine checkup. “I noticed that the doctor was pressing on his stomach for quite a long time and I feared there may be a problem,” she remembered.

Her pediatrician noticed from the physical exam that Alex may have an enlarged spleen and the ultrasound confirmed it. After additional testing at a local hospital, the Wiser family went to Children’s Hospital of Michigan to undergo additional testing to pinpoint the cause of the enlarged spleen. At the Children’s Hospital of Michigan, extensive testing was done and doctors thought that Alex may have leukemia but the tests were inconclusive.

After several weeks of testing and collaboration with other experts, doctors confirmed that Alex had a very rare form of leukemia called Juvenile Myelomonocytic Leukemia (JMML). JMML is a serious chronic leukemia (cancer of the blood) that affects children mostly aged four and under. According to the JMML Foundation, only 25-50 new cases of the disease are diagnosed every year in the United States, which accounts for one to two percent of all childhood leukemias.

“Ironically there were two other babies that also had been diagnosed with JMML at Children’s at that time, however, we were told that the diagnosis is extremely rare and Children’s may only see one case every four to five years,” says Jennifer.

Because the disease is so rare, there is very little known about the best course of treatment according to Alex’s primary hematologist/oncologist at Children’s Hospital, Roland L. Chu, MD. At the time, according to Jennifer, there was only one research protocol for treatment in the United States and one in Europe.

“Although the protocol recommended possible radiation in addition to chemotherapy and a bone marrow transplant, there was no conclusive evidence that adding radiation would increase his survival rate,” says Dr. Chu. Because Alex was so young, Dr. Chu in conjunction with the Wiser family opted against radiation which could cause additional side effects. Some theories suggested that removing the spleen would be an appropriate treatment since the spleen can house the leukemia cells. However, Alex was responding well to the chemotherapy and since his spleen shrunk, his spleen was also spared during the course of treatment.

After receiving two courses of intensive chemotherapy in June of 2006, Alex was admitted to the Children’s Hospital of Michigan, to prepare for a bone marrow transplant. An adult bone marrow match was not found, however, he did match an umbilical cord donor although it was not a perfect match.

Alex did fairly well the first 30 days after the transplant but his condition took a drastic turn for the worse when he developed graft vs. host disease. This is a complication that can occur after a bone marrow transplant, when the newly transplanted material attacks the transplant recipient's body. Alex suffered from very significant symptoms including severe diarrhea.

Within a couple of days, the Wiser family feared that they were losing their baby boy and his condition became increasingly worse for the next several months. His blood pressure had gone down to 60/40 and he developed major infections through his blood stream. He had to be put on an oscillator ventilator to help with breathing with the knowledge that very few survive. With a strong faith and support from family and medical staff, the Wiser family never gave up on Alex.

Beating all odds, Alex started turning the corner after several months of fighting for his life. “The support from everyone at Children’s was incredible but I will always be thankful for Dr. Chu especially. When we were with him, he made us feel like Alex was the only child he was taking care of. We still keep in touch with him through Facebook and words can’t express what a compassionate and wonderful doctor he is.” After Alex started improving, Jennifer’s goal was to have Alex home by Christmas and her wish came true when he was discharged from the hospital on December 14th of that year. Now five years old, amazingly, Alex has only been admitted to the hospital one time since his original hospital stay. After extensive occupational and physical therapy to help with walking and eating, you would never know that Alex has any physical problems.

Jennifer says if anything good came out of this, it is the support and friendship with other families that have dealt with a child with JMML, including the two children that were admitted with the disease at Children’s around the same time as Alex was. “I have also communicated with other families who are dealing with JMML and I think it can really raise their hope when I can tell them despite all of the obstacles, Alex is now a vibrant and healthy baby boy.”