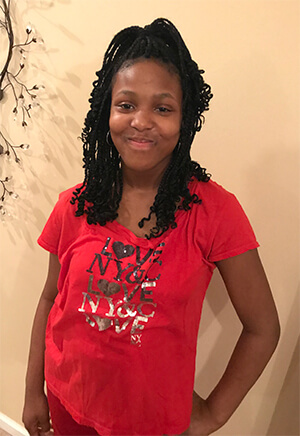 In the Fall of 2010, Toya and her husband Dr. Anthony Johnson, pastor at Prayer Temple Missionary Baptist Church in Redford, Michigan, were getting ready to go to church. Their plans took a dramatic turn when their 5-year-old daughter, Alyse, had the family praying on their way to a local emergency department after her body started shaking, her eyes rolled back and her mouth shifted to one side.

The ER doctors at the local hospital said it looked like Alyse suffered a seizure and immediately referred her to the Children’s Hospital of Michigan at the Detroit Medical Center so she could be seen by pediatric neurologists and epilepsy specialists.

After two weeks of seizures, doctors prescribed an anti-seizure medication, but Alyse still had seizures daily. She was treated for epilepsy with additional antiepileptic drugs (AEDs) and increased doses but her condition worsened. She started losing her ability to walk and talk.

“She was in the hospital often and missed a lot of school. The illness was crippling, and cognitively she was going backwards,” Toya says.

At bedtime, Alyse’s parents took turns watching her sleep. Her arms and legs jiggled all night. “Her brain never got to rest,” Toya recalls. “The seizures she had at night wiped out her memory. Whatever she learned during the day would be erased. It was described to me like she had Alzheimer’s Disease.”

With the addition of another medication (only available for purchase in Canada at that time), Alyse’s speech slightly improved and her convulsive seizures stopped, but the continuous spike-wave in slow wave sleep syndrome (CSWS) did not change. Alyse was having seizures around the clock which manifested into staring episodes, eye fluttering or her muscles giving out and she would fall.

MRI and PET scans were given to Alyse and the option of epilepsy surgery was not something they wanted to pursue since it came with significant risks in her case with low potential for benefit. A PET scan utilizing a special radiotracer identified that Alyse had a significant degree of inflammation in several areas of her brain. Alyse was started on steroids to help with the inflammation. The steroids seemed to improve her speech and ability to walk but had no effect on improving her cognitive skills. She was at a kindergarten level while in 4th grade.

Fortunately, the Children’s Hospital of Michigan has one of the nation’s few pediatric NAEC Level 4 Epilepsy Treatment Centers with a pediatric Epilepsy Monitoring Unit equipped with a comprehensive range of evaluative, diagnostic and treatment options for children with seizures.

In September 2014, Alyse was evaluated by Mitchel T. Williams, M.D., pediatric neurologist at the Children’s Hospital of Michigan, who specializes in the developing field of neuroimmunology and epilepsy.

“Inflammation plays a role in epilepsy. Anywhere from 10 to 20 percent of intractable focal epilepsy cases are due to an underlying autoimmune cause. That is a huge percentage,” says Dr. Williams.

After finding out that family members had autoimmune disorders, Dr. Williams suspected that in Alyse’s case, there was such an underlying cause making the steroids ineffective in fully addressing her issues.

Further testing showed that Alyse had seizure activity during 85 percent of her sleeping time. The treatment plan? Intravenous immunoglobulin (IVIG) for autoimmune epilepsy which involves administering a sterile solution of concentrated antibodies extracted from healthy donors into a vein. “IVIG does not suppress the immune system, it bolsters it,” says Dr. Williams. “You are gaining antibodies from many other people. It in essence tames the immune system and diffuses the abnormal response.”

Dr. Williams and the family had to request insurance coverage for this specialized treatment and fortunately their insurance company covered initial treatment for a couple of months.

Alyse responded dramatically to treatment within the first month and her seizures stopped.

“We could instantly tell the IVIG treatments were working, Alyse was improving cognitively and her teachers could tell the difference,” says Toya.

Since her IVIG treatments over 3 year ago, Alyse takes fewer antiepileptic drugs and she continues her IVIG treatments twice a month at the Children’s Hospital of Michigan. Thanks to the success of the IVIG treatments, Dr. Williams has also weaned Alyse off the steroids which caused side effects such as weight gain and diabetes.

Toya is happy to report that although she has some catching up to do cognitively, the change in the past several years has been truly dramatic. “Before the IVIG treatment Alyse had significant problems walking and talking. Now I am so happy to report my child is full of life and I have to tell her to sit down and be quiet!”

Toya says the journey has been a roller coaster ride full of fears and now triumphs. It is her heart’s desire that Alyse’s story will relieve fears and give hope to families who are dealing with the unknown when it comes to their child’s illness.

“I need to give credit where credit is due. And that is Dr. Williams and his amazing team of nurses and staff who have been a tremendous blessing to Alyse. She considers Dr. Williams her friend and we could not be more grateful that he would not give up on her and she is now doing amazing.”