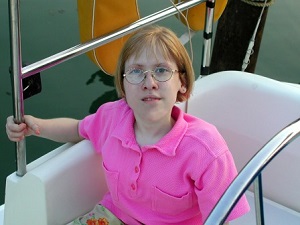 Laurel Greshel (of Trenton) felt she had a pretty normal pregnancy in 1983 when she and her husband Ted, were anxiously awaiting the birth of their firstborn daughter Amanda. During that time, routine ultrasounds were not performed. Two weeks before her due date, however, Laurel’s doctor sensed there was a problem with the pregnancy and ordered an ultrasound. “We received life-changing news when we were told my daughter’s ventricles were enlarged and she had fluid in her head,” says Laurel.

Amanda was born by C-Section at DMC Hutzel Women’s Hospital and was immediately transferred to DMC Children’s Hospital of Michigan. Doctors confirmed that Amanda had myelomeningocele, a severe form of spina bifida. Spina bifida is the most common disabling birth defect which results when the baby’s spine fails to close properly during fetal development. Though every individual with spina bifida is affected differently, the majority have problems that may include hydrocephalus (fluid build up in the brain), learning difficulties, difficulty walking, and/or bladder or bowel control issues. Amanda had hydrocephalus which required her to have 12 surgeries her first year of life.

Patricia Beierwaltes, nurse practitioner and coordinator of the center, says patients with spina bifida often need multiple specialists and resources. The aim of the center is to maximize coordination of care. “We work with families to arrange multiple appointments on the same day and location to optimize treatment, communication between specialists and families, and provide the best care possible. Having it all done in one stop makes it more convenient for families.” 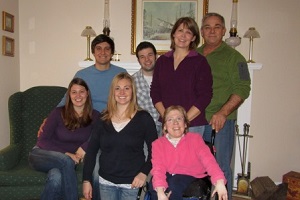 Despite her disease, Laurel says Amanda has never asked “Why Me?” Even though she has had some physical limitations such as the need to use a wheel chair to move around, Amanda is extremely social and loves to communicate with everyone. She has volunteered at her church and took a big leap in her independence when she recently decided to move into an apartment.

Laurel recently wrote a book, “Amanda Perfectly Made”, to help other families who may need resources and support with spina bifida. “The good news for those who are newly diagnosed is that compared to when Amanda was born, there are numerous technological advances to help patients better manage their condition. Thanks to the internet, support groups are also much more readily available which can be an incredible resource for families.” Amanda Perfectly Made is available through Amazon.com and Barnes and Noble.