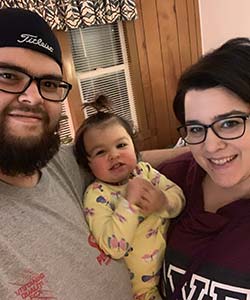 After suffering from polycystic ovarian syndrome, Heather and her husband Marcos of Birch Run, Michigan, struggled to have a baby and were thrilled to welcome their first child Amirah via C-section at 41 weeks into her pregnancy.

Amirah was a happy baby who was meeting or exceeding all of her developmental milestones.

At around 10 months of age during dinner, Heather said Amirah started acting strange.

“We thought she might be tired but then she started turning blue. We checked to see if she was choking but there was nothing in her mouth. She was just staring and not focusing,” recalls Heather.

She and Marcos promptly called 911. The responders were not sure what was going on and they decided to take Amirah to the local emergency room.

Testing revealed that Amirah had a couple of spots on her brain. It was also determined that she had two seizures within a 24-hour period.

The family decided to seek a referral to a local neurologist in Flint who was concerned with the spots and referred Amirah to Sandeep Sood, MD, neurosurgeon and co-director, Pediatric Epilepsy Surgery and the Neuro-Oncology Programs at the Children’s Hospital of Michigan DMC.

“It was a lot to take in that our baby girl was so young and may need surgery but we immediately felt comfortable with Dr. Sood and that he knew what he was doing,” says Heather.

Several tests were performed including EEG and a PET scan to determine if surgery would be a good option and it was according to Dr. Sood.

“Amirah’s MRI scan showed a tumor on the left side of her brain that was the source of seizures. We felt confident that the tumor could be resected safely and give Amirah a seizure free life,” says Dr. Sood.

No parent would wish that their child had a seizure but the family feels it was a mixed blessing that they determined something was not right.

“If Amirah had not turned blue and exhibited signs that there was a problem, we would not have known about her serious condition,” says Heather. 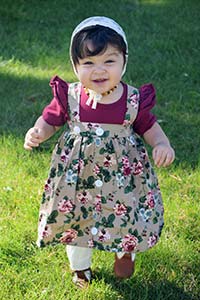 “For us we gain our strength in our faith in God and support from our family and friends. We are thankful everyday for today's medical technology in what it can do for treatment. We have a wonderful team of doctors that are on our fighting side with our miracle baby! I encourage anyone going through a situation with their child to stay strong for them as they look to you for their strength.”

After a few months of recovering from surgery, Heather says Amirah continues to be on track with all of her developmental milestones. She sees Aimee Luat, MD, neurologist at the Children’s Hospital of Michigan to manage her medication and treatment and Dr. Sood for follow up care but so far Amirah has not had another seizure since the original episode.

“She loves to play with her cousins and is walking, dancing, saying words and loves to sing. We are so thankful to Dr. Sood, Dr. Luat and all the nurses and staff at the Children’s Hospital of Michigan. They focus on Children and know what they are doing. I would not have wanted her treated anywhere else,” says Heather.