Caitlin Deluna, of Rochester Hills, was a happy, healthy baby when she was born in 2007. But her mom, Melissa, started to question that all was not right with her baby girl at age 2.

“I noticed her left eye rolled away from her face a couple of times, and a couple of days later she fell off the bed and it appeared she had a stroke,” Melissa says. 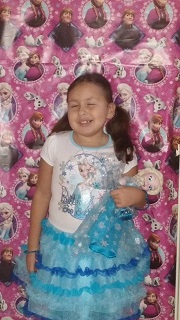 Caitlin could not use the right side of her body and wasn’t able to walk.

Family members were not convinced that there was a problem, but Melissa and her husband, Francisco, took Caitlin to a local hospital, where doctors performed Magnetic Resonance Imaging (MRI) to determine a diagnosis.

“The neurosurgeon said she had a brain tumor called brainstem glioma and there was nothing that could be done to save her,” Melissa says.

Devastated by the news, Melissa recalls Francisco commenting, if Caitlin was going to die, he would, too.

Despite the devastating diagnosis, a hematologist/oncologist at the local hospital suggested Caitlin be seen by Kanta Bhambhani, M.D., co-director, Neuro-Oncology Program, on staff at the Children’s Hospital of Michigan at the Detroit Medical Center.

“Dr. Bhambhani gave us hope which we did not have at the other hospital. She said it would be a long road but ‘we can do this’,” Melissa says.

Dr. Bhambhani says many institutions perform an MRI and rely on clinical symptoms to diagnose this deadly tumor but do not perform a biopsy to confirm the diagnosis. A biopsy can be risky, leading to complications.

“We perform biopsies on all brain stem gliomas, also known as diffuse intrinsic pontine gliomas (DIPG), and have published our experience in a major pediatric journal. We have found biopsies can be beneficial in diagnosing the tumor and did not adversely affect the outcome,” Dr. Bhambhani says.

“Additionally, it has been found that in about 10 percent of cases, what appears to be a brainstem glioma is, in fact, a different tumor called primitive neuroectodermal tumor. The treatment is different for each type of tumor,” adds Dr. Bhambhani.

As part of Caitlin’s treatment, a biopsy was performed by Sandeep Sood, M.D., co-director, Neuro-Oncology Program, and neurosurgeon on staff at the Children’s Hospital of Michigan.

Janet Poulik, M.D. pediatric pathologist medical director, Clinical Laboratories, at the Children’s Hospital of Michigan, who was a member of the diagnostic team, diagnosed a different type of tumor than what was originally diagnosed.

“Unfortunately, Caitlin's tumor was in the brainstem and could not be surgically removed. It did not quite fit the description of a brainstem glioma that has a dismal prognosis. Just as we had expected, the biopsy confirmed it was not a brainstem glioma, but a primitive neuroectodermal tumor of a high grade, which means the tumor tends to be more aggressive. It is a rare, cancerous tumor usually occurring in children and young adults under 25 years of age. It now depended on how Caitlin responded to chemotherapy and radiation,” Dr. Sood says.

Dr. Bhambhani recommended that chemotherapy, a bone marrow transplant and radiation be performed in the hopes of optimizing treatment.

Caitlin did receive surgery to correct muscles in her left eye that were affected by the tumor, as well as surgery to remove cataracts in both eyes. Cataract is a clouding of the eye's natural lens which can lead to vision loss. This has affected her vision in her left eye but she is doing remarkably well given the seriousness of her condition.

“Caitlin developed cataracts in each eye from the tumor’s radiation treatment. She also has significant scarring on her left cornea. However, after cataract surgery her vision has returned to 20/30 in the right eye, but is still weak in the left eye from the scar. With her glasses, she will have a normal life in school and be able to drive,” says John Roarty, M.D., chief of Ophthalmology, on staff at the Children’s Hospital of Michigan.

Melissa is thrilled to report that an MRI performed every six months for the past three years has only shown scar tissue and no evidence of tumors.

“Most children with this type of tumor have not lived beyond 1 to 2 years of age. We are thrilled that Caitlin responded to the treatment and is doing very well,” Dr. Bhambhani says.

“Caitlin is doing amazing. She has weakness on her right side that comes and goes and has no peripheral vision on either eye but she is alive, happy, runs around and loves riding her bike. I am so thankful to the doctors and nurses that were so amazing and saved my daughter’s life,” Melissa says. “I hope this story will remind others to always seek a second opinion if you are not happy with what you are being told. Remember to go with your gut instinct and follow through with medical care if there is any question that your child may have a problem.”