Motivation and determiniation lead to Claire's inspiring AVM recovery, Now she inspires others
Claire with members of the rehabilitation team who have worked to bring back many functions after her surgeries 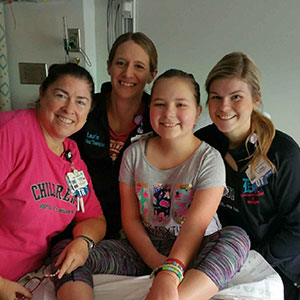 Like many kids her age, Claire of St. Clair Shores, loved to be active. One day in December, 2016 when she was trying out for a play, she did a cartwheel on stage and it appeared she pulled her muscle on her arm.

Even though it really hurt, Claire’s mom Amy didn’t see anything out of the ordinary so she iced her arm hoping it would soon feel better.

A few days later when taking her shirt off, she started screaming due to her pain. Amy took Claire to a local urgent care center but an X-ray but didn’t reveal any issues.

She went to school and played dodgeball and still had pain despite treating her with hot and cold compresses and taking over the counter medication.

By the end of the weekend, Amy’s gut told her something serious was going on when she saw   Claire dragging her right leg and holding her right arm at a funny angle.

“I knew this was something neurological,” Amy said.

Her local pediatrician suggested she go to DMC Children’s Hospital of Michigan to do an MRI since it was feared that Claire may have had a stroke.

The MRI showed a lesion on Claire’s spinal cord. She was promptly sent to the pediatric intensive care unit.

“I started googling lesions in the spinal cord and many sites pointed to cancer. I have never felt such extreme fear in my life,” Amy said.

Claire did not have cancer but was diagnosed with an arteriovenous malformation (AVM) of the cervical spine, a rare, abnormal tangle of blood vessels in or near the spinal cord. The condition can lead to numerous serious conditions including hemorrhaging, weakness, problems with balance and coordination, numbness, loss of bowel or bladder control and paralysis.

Claire’s AVM was located in the neck region of her spine. She had surgery to remove it.
After her surgery, she was paralyzed and had several complications including paralysis on her right side, incontinence and was not able to walk.

“We were so thankful at the exceptional care of the doctors and nursing staff and knew there were potential complications after this surgery,” Amy says.

“The therapy team was amazing! While working to restore many functions, the team also helped her learn how to use just her left arm and side to do many activities including bowling. After what she went through, we were skeptical when we were told about how much she could progress with therapy but thanks to the wonderful therapy team and Claire’s hard work she surprised all of us with her quicker than normal recovery after her surgery,” says Amy.

Claire had a follow-up angiogram to check for healing. That’s when doctors found a second AVM.

“The first time, it ruptured. It bled into her spinal cord, and that’s what caused the pain. They didn’t initially find the second one because of all of the inflammation but the second one was much smaller. Smaller ones typically bleed quicker and tend to rupture, which can be more serious” Amy said.“

A team of doctors and staff worked on the second surgery for 12 hours.  Doctors found a feeder connected to the second AVM that could have created another malformation, and they removed that as well. Unfortunately, Claire was incontinent and had paralysis once again.

Although the recovery for the second surgery has taken longer, Amy and her husband Glen are appreciative of how she has progressed thanks to Claire’s hard work with inpatient therapy and outpatient therapy at the Stilson Specialty Center-Clinton Township and the Rehabilitation Institute of Michigan.

“The rehabilitation has been more extensive the second time around. I am by nature a very impatient person but when something like this happens you learn to appreciate many things we all take for granted. Claire has been a trooper and I am amazed at her strength and determination in her recovery. I am not consumed with how long the rehabilitation will take. We are thankful that it appears she has not had permanent nerve damage and we are encouraged and hopeful that she will continue to progress in her recovery,” Amy says.

Charles Pelshaw M.D., chief, Physical Medicine and Rehabilitation at the Children’s Hospital of Michigan, says Claire is making noticeable progress in her recovery.

"Claire is an amazing young lady with great perseverance and yet very realistic.  From a physical therapy perspective, she has gone from minimal use of her extremities to now being able to use a device to walk, taking over 1300 steps. With regards to her occupational therapy, she still has considerable weakness in the upper part of her right arm but is making strides.  We are using electrical stimulation to strengthen that arm.  Our therapists have done a great job with Claire but her motivation and her family support are tremendously important in her recovery," he says.

Despite the life-changing event for Claire and her family, Amy says there have been many amazing moments in their journey this past year.

Claire missed many holidays at home and was given a wonderful birthday party at the Children’s Hospital of Michigan thanks to a grant from Relentless Detroit which really brightened her stay. She was also the recipient of a Young Hero’s Award where the members of the military presented her with a medal of honor. The family is extremely grateful for the excellent and compassionate care including the doctors, nursing staff and rehabilitation staff as well as family and friends who made such a positive difference during Claire’s recovery.

Claire and Amy also have future plans to help others dealing with AVM.

“Claire and I plan to write two books on AVM from a parent’s perspective and a child’s perspective. We have learned a lot from this and we hope to help and inspire others who may be dealing with a similar situation,” says Amy.