Melissa, and her husband Steve, had tried for several years to welcome a baby to their family. On their wedding anniversary, they received the gift they were hoping for. Conner, their first child was born. He entered the world prematurely at only 25 weeks, however and would face an uphill battle to survive. 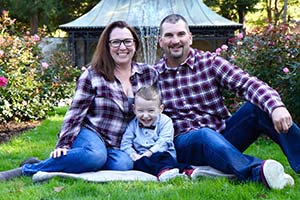 Conner spent 229 days in the Neonatal Intensive Care Unit at a local hospital and at the Children’s Hospital of Michigan DMC, where he was eventually transferred due to several intestinal surgeries that he required. Due to his premature condition he developed necrotizing enterocolitis (NEC), a medical condition where a portion of the bowel dies.

“Conner had 3 intestinal surgeries and lost 54 percent of his small intestines. We feared that he would not be able to eat solid foods. He kept pulling his feeding tube out and we were determined to do what was necessary to get him on a normal diet. He was able to accomplish that when he was 3 ½ years old,” says Melissa.

Melissa and Steve met with Children’s Hospital of Michigan pediatric neurosurgeon Neena Marupudi, MD, who recommended a surgical procedure called selective dorsal rhizotomy (SDR). The complex procedure involves selectively cutting abnormal sensory nerve fibers that come from the muscles and enter the spinal cord. This reduces abnormal input from the muscles that results in drastic improvements in tone/tightness (spasticity) in the legs.

Dr. Marupudi says that she and Erika Erlandson, MD, physical medicine and rehabilitation specialist at the Children’s Hospital of Michigan, debated whether Conner would benefit from the surgical procedure and ultimately recommended to proceed with the surgery.

“We fell in love with Conner and his charm the moment we met him. He was not the ideal candidate, due to his lack of core strength from prior abdominal surgery. But, from his story, we felt this was the best choice for him among the available treatment options for tone management. We counseled Melissa and Steve that we would be able to help relieve the pain Conner felt from the tone in his legs but that he may not have drastic functional improvements. But Conner proved us all wrong since surgery. All he wanted to do was walk, and he has worked hard to do this,” says Dr. Marupudi. 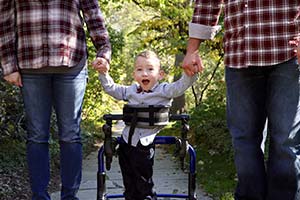 “I have the easy part. I just do the surgery. These kids really do the hard part. They keep up such a great attitude through the extensive rehabilitation. And their parents, like Conner’s, are incredibly dedicated to therapy and what is best for their child,” she adds.

Melissa says that Conner’s ability to walk with a walker has greatly improved. He is now able to walk flat footed instead of his tippy toes. He also undergoes physical therapy, occupational therapy and speech therapy four days a week at the Children’s Hospital of Michigan Specialty Center Detroit.

Conner, who according to Melissa, is quite the character who will win anyone over with his smile has made exceptional progress and is already doing things many thought he would not be able to do.

“We were told he may not be able to talk, feed himself fully or walk. He is talking, singing, and making great progress in feeding himself and walking. We are so thankful to the staff including the surgeons, therapy staff who treat us like family and to Dr. Marupudi and Dr. Erlandson who helped manage his care. It has been a big challenge but thanks to the exceptional care and follow up we don’t have to worry about his next steps. The therapists and staff are with us and guiding us every step of the way,” says Melissa.