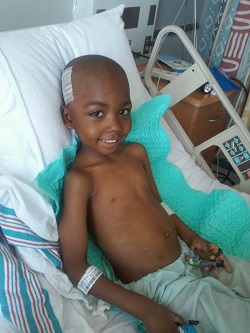 When Devon  was just a few months old, his mother Jasmine received distressing news that no mother wants to hear. Testing confirmed that Devon had sickle cell disease.

The life-long illness causes some of the red blood cells that deliver oxygen to different part of the body to be shaped like a crescent (similar to a banana). Red blood cells that contain normal hemoglobin are disc shaped (like a doughnut without a hole). This shape allows the cells to be flexible so that they can move through large and small blood vessels to deliver oxygen.

Crescent-shaped cells are sticky and can cause blockage in the blood vessels. In addition, sickle red blood cells don’t last as long as normal red blood cells. These issues can cause severe pain, fatigue, organ damage and even stroke.

Staci Weldon, M.D., pediatrician on staff at the Children’s Hospital of Michigan at the Detroit Medical Center, who specializes in the treatment of sickle cell anemia says Devon, like other children with his type of sickle cell are at risk for stroke.

“Stroke is one of the most worrisome complications that can occur in our children with the SS type of sickle cell (the most common type of sick cell). When we see signs of moyamoya disease on brain imaging, we know that there has already been damage to the blood vessels in the brain. This alteration in blood flow can eventually lead to weakness, slurred speech or other signs of a stroke,” Dr. Weldon says.

The risk of stroke became a reality for Devon when at the young age of 3, he suddenly developed classic symptoms.

“Devon was not feeling well and I took him to Children’s Hospital of Michigan. He was walking really slow and the left side of his body appeared weak. One of the nurses suggested Devon had symptoms associated with a stroke,” Jasmine says.

Diagnostic testing confirmed Devon had suffered a stroke. Devon received physical therapy to maximize the use of his left side and to decrease weakness in his left hand.

Devon was then evaluated by a pediatric neurosurgeon and other staff at the Children’s Hospital of Michigan. It was recommended that bypass surgery be performed on Devon to prevent any future strokes from occurring again since kids with sickle cell disease are at risk for developing strokes as they age.

Once a stroke has developed doctors explore the fullest range of medical options available prior to considering surgery.  Devon’s brain blood vessels were narrowing, resulting in the stroke.   Treatment involved redirecting blood supply from blood vessels surrounding the brain with the hope that new collateral blood vessels will form as he grows up and provide the blood supply his brain needs, and prevent any future strokes.

Despite life-long struggles with the disease, Jasmine is happy to report that Devon has successfully recovered from the six-hour surgery.

“We are very thankful for all of the care at the Children’s Hospital of Michigan including the doctors and nurses that cared and treated Devon,” Jasmine says.

“Fortunately he is doing very well. He does have some side effects from the stroke including some issues with his left hand curling up, but he is running around and enjoying many activities such as playing football and listening to music,” Jasmine adds.