When 34-year-old Maureen Bucci and her husband Ronny of Leonard, Michigan received the news that they were pregnant after undergoing fertility treatments, pure joy filled their hearts as they busily prepared for their miracle baby. 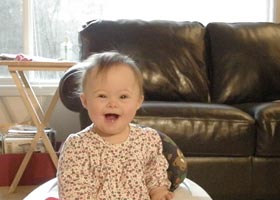 Maureen, a 7th grade school teacher at East Middle School in Farmington Hills had a pretty routine pregnancy but at about 39 weeks into her pregnancy, a test showed her babies heart beat was in distress and doctors at a local hospital in Pontiac performed an emergency c-section.

The series of events that followed would be every expectant new parent’s nightmare, as their precious little girl Francesca took a drastic turn for the worse.

“Even though I was under heavy sedation and was going in and out of consciousness, I remember thinking why isn’t my baby crying?” says Maureen. Doctors found that Francesca had swallowed meconium (the baby’s first stools) leaving her deprived of oxygen for several minutes.

Maureen remembers reading about the possible dangers when a baby breathes in amniotic fluid containing meconium in the popular book What to Expect When You’re Expecting, but had not given it a second thought.

When a baby’s brain is deprived of oxygen and blood supply during birth, serious mental and physical disabilities can occur. Seetha Shankaran, M.D., neonatal and perinatal medicine specialist at the Children’s Hospital of Michigan and Hutzel Women’s Hospital, who served as the lead investigator of the whole body cooling study, says initial results of the study, showed that cooling the whole body and thus blood flow to oxygen-deprived newborns for three days by using a special, temperature-controlled blanket can reduce the severity of brain damage.

A key factor according to Dr. Shankaran, involves cooling the baby within six hours of birth. Cooling also appears to decrease the metabolic rate of the brain and a number of toxic substances that cause injury. It can also prevent brain cells from swelling, producing cell damage.

Francesca was able to receive cooling blanket therapy within the six hour window of time that is recommended but that was just the beginning of the toughest fight in this miraculous newborn’s life.

As doctors, nurses and staff at the Children’s Hospital of Michigan worked feverishly to save Francesca’s life, Maureen remembers feeling numb at her doctor’s comment that not only was her brain at risk but every major organ in her body was affected by the lack of oxygen. “The doctors were so supportive and caring and I remember asking one of the doctors if you are working so hard to save her that means there’s still hope? The doctor assured me there was, but cautioned me the Francesca was the sickest baby in the hospital. There was only so much they could do, yet I was hopeful for many reasons including the strong belief that I was at the best possible place where my baby could be to fight for her life.”

The next several weeks were fraught with fear as doctors used a variety of techniques to stabilize her, including ECMO, a modified heart-lung machine used for newborns in respiratory distress that pumps and oxygenates a patient's blood, allowing the heart and lungs to rest as well as a special ventilator to help her lungs heal.

As fear increased that Francesca may not make it, all of a sudden she started getting better, in fact much better than most everyone involved in her care would have anticipated. “A doctor, who was so wonderful with Francesca kept telling me that she believed in the power of touch. We made sure that we were touching Francesca during this very fragile time, and I truly believe that in addition to the incredible staff at Children’s who were the lifeline for my family and baby, Francesca responded very positively to our touch,” says Maureen.

During this process, doctors also discovered that Francesca had Down syndrome. Maureen commented that many parents would normally react with distress and disappointment at the challenges that diagnosis might bring, yet she and her husband did not react in that matter and were just incredibly thankful that their baby started to improve dramatically.

“We received incredible news that despite everything Francesca went through; her EEG showed that brain activity which was initially abnormal was back to a normal range.”

After a very intense and emotional two months in the hospital, Maureen received the unexpected news that Francesca could go home. Francesca is a happy, alert, active and nosy baby who is eating table food and learned to crawl.