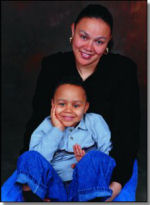 And when the five-year-old preschooler at Trinity Lutheran Church in Clinton Township grows up, he wants to be Tarzan "because he swings and climbs trees."

His mother Sonya, 35, a Detroit homemaker and mother of two, giggles as her busy son wiggles around the room and lists all the things he likes to do through a mouthful of pretzels.

His mother is smiling and laughing a bit more now, after what she describes as the "shock and devastation" of learning that her youngest child had cancer in both eyes when he was only ten months old.

"I thought Frederick had what they call a 'lazy eye,'" she said. "We took him to a neighborhood eye clinic and they referred us to a specialist in Grosse Pointe. He said, 'I'm afraid to tell you it's cancer. You need to take him to Children's Hospital of Michigan as soon as possible.'"

The next day, Frederick became a patient of ophthalmologist Dr. John Roarty at Children's Hospital of Michigan. Dr. Roarty explained to the Harringtons that their son suffered from cancer of the retinas and needed chemotherapy and radiation treatments. Eventually, doctors had to remove the boy's left eye.

In May, 2001, the cancer spread to the bones in Frederick's legs. He had to undergo a bone-marrow transplant and stay in a special room at the Detroit Medical Center's Harper University Hospital for nearly a month to keep him safe from germs as he recovered.

The staff at Children's Hospital of Michigan pulled up stakes and followed the Harrington family to Harper Hospital, proving to be loyal vigil-keepers in a trying time.

"I was so happy to see his nurses from Children's Hospital," said Sonya Harrington. "Kit and Mindy would stop by to cheer him up. Frederick didn't feel much like playing, but they were always asking if we needed anything. It was a real comfort to all of us. You wonder, 'Why me, Lord? Why my child?' But then you thank God for all those people at Children's Hospital."

Since then, there's been good news.

Frederick's cancer is in remission and he's set to begin kindergarten in the fall. His father, Frederick, 37, recently bought his son a t-ball set. They practice in the yard and the little boy is showing promise as a Little Leaguer.

"I whack the ball by the trees," said young Frederick, his brown eyes gleaming.