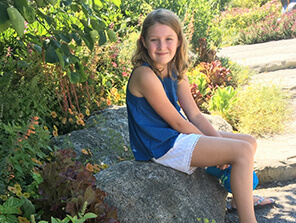 To see Gabby now anyone would be hard pressed to know that just a year before, the adolescent straight A student from Texas, was airlifted on life support to the Children’s Hospital of Michigan DMC, with her parents clinging for hope that she would survive.

Fortunately for her parents Todd and Becky, their nightmare has the happiest ending they could ever imagine.

Gabby was a healthy active child entering third grade in 2015, when she had a fever and became ill the first week of school.  A local doctor in Texas said Gabby had the flu and she was kept home for a couple of days. When her fever continued to be high a few days later, she went back to the hospital but doctors still thought she was suffering from the flu.

Later that week, Todd, a pilot with a major airline, was out of town when his wife Becky rushed Gabby to the hospital after she developed a seizure.

“She was taken to the local Children’s Hospital in Texas when it became evident something serious was going on. In a matter of a few days, we went from thinking Gabby had the flu to a situation where she was fighting for her life,” Todd says.

Gabby had a fever of 107 and her heart rate was abnormally high.  Doctors had to put her in a cooling blanket to reduce her body temperature. Her brain was swelling and she was on life support. Doctors were doing a number of tests to try to determine the cause of her illness.  Over the course of three days she started to develop blisters underneath her eyes.

Doctors determined the blisters were caused by a rare secondary condition called Stevens- Johnson Syndrome (SJS), a severe skin reaction most often triggered by particular medications. SJS  often begins with a fever and flu-like symptoms. Within a few days, the skin begins to blister and peel, forming very painful raw areas called erosions that resemble a severe hot-water burn. The skin erosions usually start on the face and chest before spreading to other parts of the body that can damage the mucous membranes, including the lining of the mouth and the airways, which can cause trouble with swallowing and breathing. The painful blistering can also affect the eyes, urinary tract and genitals. The condition affected more than 70 percent of Gabby’s body.

Gabby was in an induced coma to allow her body to be in a dream-like pain free state according to Todd.  During this time period, doctors in Texas determined that Gabby also had another rare disorder hemophagocytic lymphohistiocytosis (HLH), a condition in which too many infection-fighting cells are produced and activated, causing organ inflammation and damage.

HLH is not a cancer, but it is treated with some of the same medications as leukemia and lymphoma. If left untreated, patients with HLH may survive for only a few months, due to progressive multi-organ failure.

Because of her complex condition it was determined that Gabby would best be treated for SJS at a center that had a pediatric burn unit. Similar to severe burns, SJS can cause extensive skin damage leading to a dangerous loss of fluids and allow infections to develop. Serious complications can include pneumonia, bacterial infections, shock, multiple organ failure, and death.

Despite the grave condition, Todd and Becky felt gratitude and confident in their choice once their daughter was airlifted to the Children’s Hospital of Michigan.

The next couple of months were a rollercoaster of emotions as Gabby would make improvements but then regress.

One especially emotional moment came when it looked like Gabby was making progress and might be transferred from the ICU to the burn unit.

Todd explains that Gabby had been slowly weaned off sedation medications with the purpose of removing her assisted breathing. This was done successfully, and there was about a 12 hour period where she was responsive and had even whispered "it's alright Daddy" when she saw Todd crying. But then things took a turn for the worse.

That evening, she became unresponsive to commands, would not sleep, and would have occasional fits, to the point where her arms had to be restrained. This lasted for three days. She had a brain activity scan during this period that came back normal, but the fear was that she was becoming encephalitic and that the steroid treatment would have to be stopped for the HLH.  There was also renewed discussion for the need of a bone marrow transplant.

“An MRI was being done but it was at the end of the day and we were overwhelmed with emotion on why she was regressing again. We will never forget the expertise and kindness of Dr. Oz (hematologist-oncologist Bulent Ozgonenel, M.D.) who managed her care related to HLH. It wasn’t his job to do this but he stayed late at night and went out of his way to find the results of the MRI and made sure to let us know that the results showed Gabby did not have brain damage and he felt she would be o.k.,” Todd says.

The next morning, as Todd and Becky were meeting in the ICU room, the neurologist noticed Gabby’s eyes were tracking them. Amazingly, her fog lifted, and within the next 10-15 minutes she was trying to speak, smiling, and gave a weak thumbs up. From that point, her recovery was remarkable.  Eventually she was able to breathe on her own. Treatment continued in the burn unit where her skin began to heal and she continued with her treatment for HLH.

“Prior to the modern treatment era, HLH had a high mortality among children. HLH can be familial (primary or genetic) or can develop in the setting of a viral infection (secondary HLH) or in the setting of a rheumatologic disorder (referred to as Macrophage Activation Syndrome),” says Dr. Ozgonenel who managed her treatment with HLH.

“Gabby's investigations done both at our Children's Hospital of Michigan and also those initiated in Texas suggested that, in her case, the HLH was probably secondary to Parvovirus B19 infection, a common infection seen in children that is often associated with fifth disease, also referred to as slapped cheek disease. She had a rapid and encouraging response to the multidisciplinary therapy, immediately noticeable in improving lab testing initially, and then subsequently followed by a clinical improvement. We are thrilled that Gabby has had an excellent recovery to her very serious conditions,” he adds.

Gabby would require physical and occupational therapy in the coming months and Todd and Becky made the decision to continue that treatment back in Texas where she could be closer to home.

Gabby continued to make a remarkable recovery in Texas. She went back to school after the holiday break and continues to be a straight A student while playing tennis and singing in the choir.

Todd mentioned a local doctor said that getting two rare disorders like HLH and SJS was like being struck by lightning twice. Fortunately the care she received helped save her life.

“We are so thankful to the entire team at the Children’s Hospital of Michigan which included treatment in the burn unit, ICU, hematology, neurology and so many other departments. We are especially grateful to Natalie Fisher who coordinated so much of the care in the burn unit and communicated what we needed to know throughout our stay. What happened to Gabby was horrible but the care she received locally and the Children’s Hospital of Michigan was amazing. Fortunately this was a horrible story with a great ending,” Todd says.

Congratulations on taking the first steps toward better health. A member of our team will contact you soon.