After 13 years of steroid treatments for nephrotic syndrome, Hamoudi Abla was experiencing significant side effects. The steroids had stunted the 14-year-old's growth and caused him to gain weight. 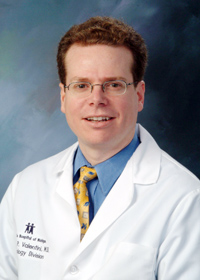 His father was ready to OK a second treatment with a chemotherapy agent called cyclophosphamide when a family contact suggested they talk to Rudolph Valentini, M.D., FAACP, a pediatric nephrologist who serves as Director of Dialysis Services at DMC Children’s Hospital of Michigan and Associate Professor of Pediatrics in the Division of Nephrology at the Wayne State University School of Medicine. With the family at their home in the United Arab Emirates and Dr. Valentini in his office in Detroit, they met for the first time via conference call.

“At some point during the call I said, ‘Please don't give him another round of cyclophosphamide. It could increase the likelihood of sterility and he may not be able to father a child when he grows up,’” Dr. Valentini said.

It was the first the family had heard of that potential side effect and it got their attention. Mr. Abla wondered what Dr. Valentini would do differently than the other specialists they’d seen.

“I told them, ‘What I would like you to do is come see me in Detroit. We'll do a kidney biopsy and if it shows what I think it will, we'll try a medicine called cyclosporine.’”

The family had already traveled extensively in Europe and the United States for treatment at other children's hospitals, so they were hesitant to make another trip. But Dr. Valentini explained that he had been involved some of the original research on cyclosporine as a treatment for nephrotic syndrome and he'd personally seen it work remarkably well on children like Hamoudi. “I told him I couldn't guarantee anything, but I had great confidence it would help his son,” Dr. Valentini said.

That was enough for Mr. Abla. He and his son got on a plane and traveled to Detroit in July 2010. As Dr. Valentini had expected, a kidney biopsy revealed Hamoudi had minimal change disease — a diagnosis that had been in question during their previous visits to Europe and the United States. Dr. Valentini ordered cyclosporine treatment and began weaning Hamoudi off steroids.

“It’s been almost 18 months now and Hamoudi has lost around 13 kg and gained about 15 cm in height,” Mr. Abla said. For the first time in his life, Hamoudi’s urine is testing protein free. “We are hoping that with Dr. Valentini’s plan, our son will grow out of nephrotic syndrome and will have a normal life without medications. Most of all, we are hoping his kidneys will continue functioning properly.” 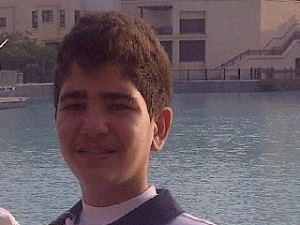 Dr. Valentini is now managing Hamoudi’s care long distance. Mr. Abla and his son make the 7,000-mile journey to the Children’s Hospital of Michigan about once a year. Dr. Valentini is currently weaning the teen off cyclosporine, which can cause kidney scarring when used for prolonged periods, and transitioning him to another drug called Myfortic® (mycophenolate).

“We struggled for 13 long years with relapses and hospital admissions,” Mr. Abla said. “Our son was not having a proper childhood and we wanted to give him the best medical assistance available. Meeting Dr. Valentini changed our life and we are thankful to God first and Dr. Valentini second for getting us to this point. The great care that our son received at the Children’s Hospital of Michigan is priceless.”