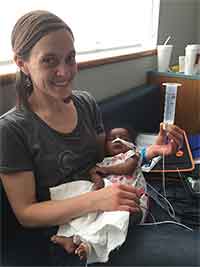 In 2017, Kristen and her husband Nate of Detroit, were excited to welcome Hazel, who was adopted and the youngest of five children into their family.

Shortly after birth, it became apparent Hazel required specialized treatment. While in the NICU at DMC Sinai-Grace Hospital, doctors determined she may have Dandy-Walker Syndrome, a congenital brain malformation involving the cerebellum (an area at the back of the brain that controls movement) and the fluid filled spaces around it. Symptoms include slow motor development and progressive enlargement of the skull. In older children, symptoms may include increased intracranial pressure such as irritability, vomiting, and convulsions, lack of muscle coordination, or jerky movements of the eyes.

At about 2 months of age, Kristen and Nate continued to be concerned with Hazel’s development.

“I was very worried that she was not gaining weight. Hazel had noisy breathing and her feeding issues had become more apparent. She weighed only 7 pounds when she was 4 months old,” Kristen says.

Hazel was evaluated by Bianca Siegel, MD, ear, nose and throat specialist at the Children’s Hospital of Michigan. Dr. Siegel says she was having difficulty breathing, eating and was not gaining weight appropriately and referred Hazel to the Pediatric Aerodigestive Clinic (PAC) at the Children’s Hospital of Michigan. The clinic offers specialized treatment for children with a variety of airway, breathing and swallowing disorders, sleep apnea and related problems such as malnutrition and gastroesophageal reflux.

“Hazel was diagnosed with dysphagia, reflux and laryngeal cleft, and underwent an injection procedure for the cleft. She also required a feeding tube to help her catch up nutritionally. Given her variety of medical conditions, the pediatric aerodigestive center provided access to all of the specialists she needed to help her thrive. She is now doing wonderfully, and continues to follow up with Drs. Gonik, Cares and Srivastava in the Pediatric Aerodigestive Clinic," says Dr. Siegel.

During the course of more than one year, Hazel was treated by a number of pediatric specialists at the Children’s Hospital of Michigan including ENT, Surgery, Gastroenterology, Occupational Therapy and Pulmonary for conditions including Dandy-Walker Syndrome, laryngeal cleft, chronic cough, and feeding difficulties.

“When I first met Hazel, she was extremely malnourished due to her medical condition and feeding difficulties.  With the help of our multi-disciplinary team, we were able to collaborate medical treatment and surgical procedures for Hazel.  She eventually required a g-tube to assist with feeding.  With the help of our feeding therapists, she is eating many of her feeds by mouth. She is now a chubby happy girl who is one of the cutest toddlers you have ever seen,” says Kristen Cares, MD, gastroenterologist at the Children’s Hospital of Michigan who was part of the team treating Hazel.

Kristen(Egger) says that initially she was discouraged at the thought of Hazel being given a feeding tube but the feeding tube ended up being miraculous. Hazel is doing significantly better with feeding.

“She still is very picky and struggles eating an adequate volume of food, but I would say that she is regularly able to enjoy meals with the rest of the family. She has come a long way and is able to feed herself a bottle, as well. We still have to use reflux, breathing, and allergy medication to manage her symptoms, as well as use a feeding tube at night to increase her calories; however, Hazel's symptoms seem to be well managed with these treatments,” says Kristen.

She adds that Hazel enjoys life with her siblings and mom and dad. She is very social, and offers a giggle and smile to most people who take time with her. She loves to play with toys that you can stack and assemble together, and enjoys music and singing.

“Our experience with Children's Hospital of Michigan, from medical assistants, to nurses, doctors, and therapists, has been so reassuring, gentle and exactly what we needed to see our sweet girl recover and thrive. Feeding tubes and surgeries can seem very scary. Our experience has taught us that our specialists care beyond medical treatment. They care about the well-being of our daughter and our family. This is what we needed! Our new normal is no longer a scary thought. We can see the fruit of Hazel's treatment as she both grows in body and in the ability to function more independently! We are so thankful!” she says.

“They spent a lot of time with us, when many others would have quickly pushed us through. This made all of our difficult experiences with Hazel's health so much easier!” she says.