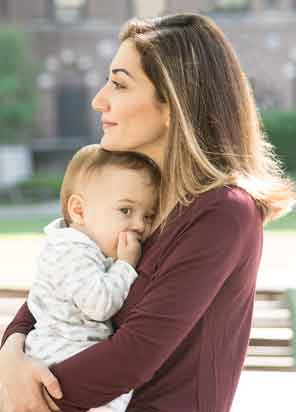 After experiencing spotting in her second pregnancy, Reem of Farmington Hills, received very unsettling newsfor any pregnant woman when an ultrasound at a local hospital revealed that at 23 weeks into her pregnancy, her cervix was open and her son could come out at any time.

Extra time was crucial for survival of her precious baby Jonathan, and she was hospitalized with the hope thatshe and her baby could delay the birth.

Jonathan had other plans and on May 27th at 25 weeks and 5 days, he came into the world weighing one pound, 10 ounces.

The good news was that he was alive and doing well his first week of life given his premature birth. But his condition deteriorated due to various issues.

“He had numerous issues. He was barely breathing, and had pneumonia and sepsis. We were told at the local hospital that he was in danger of not surviving and they suggested he be transferred to the Children’s Hospital of Michigan” says Reem.

Jonathan was promptly transferred to DMC Children’s Hospital of Michigan by Panda One, an intensive care transport team that provides highly specialized care during the transportation of critically ill neonatal and other sick children from all over Michigan.

Jonathan was developing kidney failure and could not breathe without a ventilator.

“I was told he was the sickest premature infant at Children’s Hospital of Michigan at that time,” recalls Reem.

Indira Bhagat, M.D., neonatal and perinatal specialist at the Children’s Hospital of Michigan, says when Jonathan arrived at the hospital she feared he was not going to survive more than a few hours.

“He was in acute respiratory failure and had very low oxygen levels in his blood. He was on a special ventilator called HFOV (High Frequency Oscillator) that provides 100% oxygen supplementation. On route to DMC Children’s hospital, he was also started on inhaled nitric oxide gas which can help in better oxygenation, but Jonathan was not able to maintain oxygenation. He was in septic shock, which dropped his blood pressure and he developed acute kidney failure as well as severe anemia.  He also developed lung disease due to lung infection on top of having premature lung,” says Dr. Bhagat.

She says the neonatal-perinatal team tried every support available to keep Jonathan alive including changing to a ventilator called high frequency jet ventilator. Fortunately this was able to bring his oxygen to a normal range. 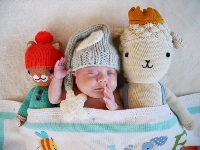 Jonathan was placed on multiple medications to bring his blood pressure up so that his heart did not stop beating and was placed on broad spectrum antibiotics to treat gram negative bacterial sepsis and pneumonia. He also received multiple blood products for days. After two weeks, we still feared he was not going to make it. It was a long painful journey for Jonathan but we are so happy that he turned a corner, made it back home with his parents and he is doing great now,” Dr. Bhagat says.

Reem is happy to report that at four months of age, Jonathan is now home and eating on his own, weighing more than seven pounds. He will need close follow up to monitor his neuro-developmental outcome as he grows older. He may also need physical therapy and occupational therapy down the road but he is doing extremely well given the circumstances of his premature birth.

“We are so happy that Jonathan is doing so well and are very thankful to the amazing staff at the Children’s Hospital of Michigan. We can’t say enough good things about his exceptional care. When I show pictures of Jonathan, people would not know what he went through, which is pretty incredible given that he almost did not survive,” says Reem.