When Cindy McAdams and her husband John of Waterford welcomed their second child Jonathon Robert into the family in September of 2009, they were thankful that their baby seemed fine and was progressing normally. 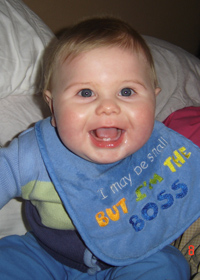 But when Jonathon was about three weeks old, Cindy was worried that something was definitely not right. “He couldn’t keep his food down and was constantly vomiting.” When she took Jonathon to the doctor and he lost about one pound in just five days, her pediatrician suggested he be taken for testing and an ultrasound at a local hospital.

They decided to go to a local hospital closer to home for the initial ultrasound but they were very disappointed to learn that an ultrasound could only be done during normal business hours. “I felt it was a sign that we should go to Children’s Hospital of Michigan where they specialize in children,” she recalls.

The very next morning the McAdams family drove to Children’s Hospital of Michigan and their baby was seen by a nurse within 20 minutes. “I was so impressed with the entire staff and immediately felt very comfortable that this is where we should be.” After an ultrasound was performed, the family was told that Jonathon Robert had Pyloric Stenosis, a condition that causes severe vomiting and can be very serious, potentially leading to dehydration, weight loss and other medical problems.

Cindy’s mother and her husband both had the condition so the family was familiar with the disorder, in which the muscle in the lower part of the stomach, called the pylorus, builds up and blocks the flow of food into the small intestine. “I was told that essentially my baby was starving,” Cindy recalls.

After testing confirmed the diagnosis, Jonathon Robert was taken into surgery. Joseph L. Lelli Jr., MD, chief of Pediatric Surgery at Children’s Hospital of Michigan performed laparoscopic surgery to correct the condition. During the procedure, tiny incisions were made to allow small instruments into the abdomen. A special instrument was used to divide the muscle of the pyloris to open up the gastric outlet allowing the stomach to empty normally. According to Dr. Lelli the surgery was a success. “Jonathon Robert should be able to function normally without any long term effects,” he says.

Cindy says that within 24 hours of the surgery, her baby boy was a completely different person. “He was happy, not spitting up or vomiting and eating great.”

“I cannot say enough things about the entire staff at Children’s. They immediately addressed the problem, were compassionate and my baby is doing great.”