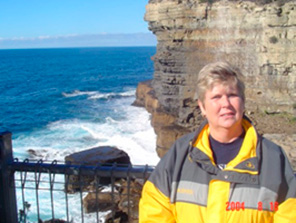 In celebrating the Hospital’s 125th Anniversary I would like to share my success story that took place in 1963. I was 10 years old, had lost my father who was 36 years old the year before of a massive heart attack and then they discovered what was happening to me.

I was invited to go to summer camp through our local church so we needed a physical form filled out. We went to my pediatrician who performed the physical. He told my mother I should go to Children’s Hospital of Michigan to be checked out because he heard a loud murmur in my heart.

My mom then called the hospital and arranged for an appointment with Dr. Lyle F. Jacobson. He was a very nice man. I recall he reminded me of Santa. He told my mom I needed to come in overnight so I could have what they called a heart catheterization. The test was scheduled for June 18, 1963 Dr. Seymour Gordon and Dr. Anthony Nolke performed the catheterization. Dr. Jordon would be the surgeon and Dr. Webster was the attending Resident.

Those two doctors discovered a hole in my heart, a left to right shunt at the atrial level. The defect was stated as being “a rather large interauricular septal defect”. I needed to have open heart surgery performed by Dr. Jacobson, ASAP. Dr. Jacobson said we had to do this surgery soon because I was walking around with as he put it a “time bomb” in my chest. Also, the surgery was considered experimental. There would be a long recovery and if I did not have it I would not live to see my 11th birthday which was in November. Dr. Jacobson said no one had performed a surgery like this and my surgery and I would be in the medical journals because it was so experimental.

My mom made the appointment for August 16, 1963. They needed a week prior to surgery to make sure I was healthy and I had no undetected infections. They took us on a tour of the whole wing. I saw the giant marble bathtub I would be bathed in the night before my surgery and the pre-op where I would be waiting without my mom to go into the O.R. I remember bits and pieces of the pre-op area. They would give you, your choice of any doll or stuffed animal to hang on to while you waited.

After we finished the tour, mom stayed a while and left. She turned around and waved. Then as she walked out of sight, I started to cry. I was scared and I didn’t understand what was happening. I remember a very nice nurse coming in and having me come up to the desk with her and watch her work. I felt better then. I didn’t want to be alone.

Over the course of the next week I met so many people, including nurses, doctors, and aides. Everyone wanted to listen to my heart. I guess I was pretty friendly because they had me go around with the nurses to help with the children to explain what I went through on my first day. I liked doing that, made me feel special somehow. All I know is that there were so many loving and kind people who worked there.

After a week passed, the moment came when they were taking me to pre-op. My mom hugged me like it was to last forever, she kissed me and told me “not to be afraid because she would be right outside the door and I would be ok”, then with a wave of her hand, I disappeared into the pre-op.

I woke up in a big, cold room, I was scared, hurting and everything was hazy. I heard my mom saying my name over and over very softly and when I seemed to open my eyes finally there she was, hugging me and smiling a big smile. She said they were all done and I did really well and that I was now in I.C.U.

Dr. Jacobson said I would be there during the weekend to recover. Then on Monday morning, Dr. Jacobson came in bright and cheerful with that big smile and said are you ready? I said yes and he said remember what I told you, it won’t hurt, but blood will be everywhere so don’t be afraid. I said ok. So, he proceeded to put his fingers around where this big tube was coming out of my side under my incision and he counted “ 1, 2, 3“ and he pulled out the tube. He pulled the tube out, blood was everywhere but it didn’t hurt. To me it was like when a magician pulls a tablecloth out and the dishes just sit there on the table as if nothing happened.

It was a long two weeks but I had lots of friends and we had four people to a room. We made tents in our beds, pushed them together, laughed, played and it seemed more like a vacation then the hospital.

I came home with over 115 stitches in my body, bruises, holes from where the shots were given and the IV’s were put in my arms and hands and the giant tube that was filtering blood out of my heart. I was alive and still am 49 years later. I am still thankful to everyone at Children’s Hospital of Michigan then and now. I am proof you have great people and terrific ideas.

Thank you to all of the people who worked on my case and those whom have come after them, Children’s Hospital of Michigan is a good place to be!