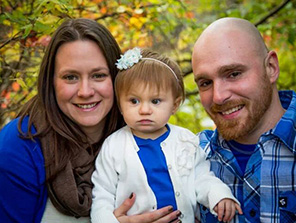 For most new parents, the first few days after birth are busy learning how to change diapers, feeding and getting to know their baby. Andrea and Jason Fabrizio had many more things to worry about including whether or not their baby would survive.

After a routine ultrasound to find out the sex of their first born, Andrea and Jason received the distressing news that their baby girl Kenna had a congenital heart condition known as transposition of the great arteries (TGA). The condition occurs when the two main arteries going out of the heart - the pulmonary artery and the aorta - are switched in position, or transposed.

“After going to many hospitals, we made the decision to deliver Kenna at DMC Hutzel Women’s Hospital because we knew that she would require immediate care and surgery at Children’s Hospital of Michigan,” says Andrea.

Andrea and Jason met with Henry L. Walters III, MD, chief of Cardiovascular Surgery on staff at Children’s Hospital of Michigan, before Kenna was born. They immediately felt at ease after talking to Dr. Walters. “He told us that despite the serious condition, Kenna should lead a normal life after surgery,” says Andrea.

When Kenna was born in October 2012, her blood oxygen level was so low that she had to have an emergency procedure to open a hole between the receiving chambers of her heart. At just 10 days old, Dr. Walters performed an operation to correct the transposed great arteries (TGA). “We repaired Kenna’s heart by switching the aorta and the pulmonary artery so that they connected to the correct pumping chambers [ventricles]. In her case, the arteries that supply blood to the heart muscle [coronary arteries] were remarkably abnormal and moving them so that they connected properly to the aorta was challenging. But everything with Kenna’s surgery turned out great and I think that she should lead a vigorous and normal life,” stated Dr. Walters. 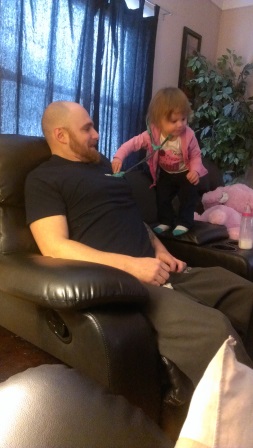 The great news for the Fabrizio family is that the surgeries were a success. “She went in to have a procedure about nine months after she was born to dilate her right pulmonary artery but, other than that, you would never know that Kenna had major heart surgery,” says Andrea who adds Kenna has also become fascinated with doctors and her favorite show is Disney Junior's Doc McStuffins. “Words cannot express the gratitude we have for Dr. Walters and the entire staff at Children’s Hospital of Michigan. We cannot thank them enough. Kenna received the best care available and she is doing fantastic!”