Identical twins, developing the same form of cancer, at the same time is extremely rare and the chance that both girls would survive was uncertain. Please watch their amazing journey just recently featured on ABC Family and The 700 Club.

Attacked By A Rare Form Of Cancer As Infants,“Maddie” And “Bella” Dunn Are Now Thriving

Spend an hour with the bright-eyed and bubbling Dunn twins – Madeline and Isabella – and you’d never guess that these two smiling beauties were diagnosed with a potentially fatal form of cancer less than six months ago.

But it’s true. For Michael and Alissa Dunn, the proud parents of “Maddie” and “Bella,” the joy of giving birth to two gorgeous identical twins on July 4, 2007, was brutally interrupted at Labor Day, when a cancer doctor walked into a waiting room at their local community hospital and gave them some of the worst news a terrified parent will ever hear.

“He was holding a computer printout,” recalls 32-year-old Michael Dunn, a mechanical engineer, “and his hand was shaking. I took one look at that, and I sensed what was coming.” 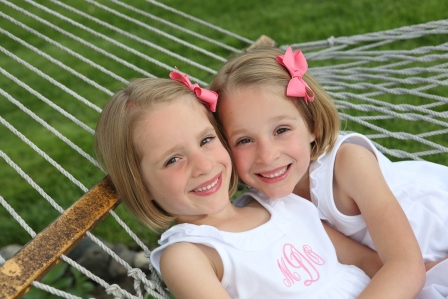 Yes, it was very difficult,” adds Alissa Dunn, the mother of the tiny twins and their curly-haired, two-year-old brother, Isaiah. “I’m sure the doctor was just heartbroken about having to give us the news.”

But the shaken oncologist at the local hospital had no choice. “He told us that Maddie’s MRI had come back, and that it showed a large mass in her abdomen,” says Michael today. “They hadn’t done a biopsy yet, but there was little doubt that the softball-sized mass was a tumor that had invaded her liver. Maddie had developed a rare form of cancer – what the medical people call a ‘neuroblastoma’—and her condition was deteriorating rapidly.”

Stunned by their misfortune (since this form of childhood cancer attacks only 650 babies and small children in America each year), the shell-shocked parents quickly agreed to have their child admitted to the local hospital. And when a surgeon recommended tumor-removal surgery for the ailing baby on the following day, they readily accepted his recommendation. Barely two months old, poor Maddie would have to endure a major surgical procedure in spite of her frailty.

As they struggled to encourage and support each other during the long night that followed the cancer diagnosis, Michael and Alissa clung fiercely to their Christian faith. “We knew that God had sent the twins to us as a gift,” Alissa says today, “and we do believe that everything happens for a reason, as a part of God’s plan. But it was difficult for us that night. It was terribly hard.” “They’d been born on the Fourth of July,” adds Michael with a quiet smile, “Our two little firecrackers!”

When the morning of the surgery finally arrived, the two parents took a deep breath and steeled themselves for what lay ahead. But then, only a few hours before the complicated procedure was scheduled to begin, the telephone rang – and they received what Alissa describes today as “an absolute miracle.”

The caller was a cancer specialist at the local community hospital – and he’d called them with a surprising suggestion: Why not transfer their struggling baby to the Detroit Medical Center’s (DMC’s) Children’s Hospital of Michigan? Children’s was the largest freestanding hospital for kids in Michigan and the pediatric cancer doctors there had much more experience at treating this rare, nerve cell-based form of cancer than their colleagues anywhere else in the state.

Eager to take advantage of so much medical expertise, Michael and Alissa quickly opted for the new plan. And within an hour of their green light, they had tucked the threatened infant into the family car and were headed for the Neonatal Intensive Care unit at Children’s.

There the laboring infant would meet a 20-year-veteran pediatric oncologist – Jeffrey W. Taub, M.D. – who has successfully treated more than a hundred children with cancer in recent years. A skilled pediatric specialist, Dr. Taub has also published a series of groundbreaking research studies on cancer in children during the past decade, with several of them funded by the National Institutes of Health in Washington.

Based on his many accomplishments, Dr. Taub seemed like the perfect choice to direct the battle that would now be fought against Maddie’s life-endangering cancer. But there was more. To their amazement, the Dunns also discovered that Dr. Taub was himself a childhood cancer survivor and that his own successful recovery at Children’s Hospital of Michigan had inspired him to become a pediatric cancer doctor!

It was a remarkable introduction, to say the least. But the surprises were only beginning for the startled Dunns – who reacted with “enormous relief” when Dr. Taub explained that he did not want to put little Madeline through surgery, after all. Why not? “If you look carefully at the medical literature,” he would explain later, “it’s clear that there’s no real advantage in trying to remove the primary tumor. Trying to remove it wouldn’t have affected the ultimate outcome – and I was also concerned that it might not be possible to stitch up the incision later, which could have led to dangerous infections.”

Based on these considerations, and that he’d successfully treated a newborn with neuroblastoma by using chemotherapy only a few years before, Dr. Taub outlined a course of treatment that would spare the baby from surgery. Remembers Alissa: “Dr. Taub is the most caring doctor I’ve ever met. You can tell within five seconds that he truly cares for these kids he treats, and the other doctors and nurses are the same way.

“We were also deeply touched by the kindness and the dedication of Dr. Taub’s colleague, Dr. Ana Xavier. I know I’ll never forget standing next to Madeline's bed, watching Dr. Xavier and Dr Taub examine our little infant. When she was finished she looked up and said that she would do everything she could to help her. My eyes filled with tears, knowing that she truly meant that they’d do their best to save our baby girl.”

Adds Michael: “They were heartfelt in everything they did, and we got lots of hugs – but they were also completely honest and never gave us false hope. I can remember several occasions when Dr. Taub warned us: ‘You need to understand that all of this will get worse before it gets better.’”

And it did. Within a few days of Maddie’s admission, Bella also began to display symptoms. The CHM team responded quickly and soon determined that both girls had come down with the same rare cancer, probably as a result of “sharing blood cells in the womb,” according to Dr. Taub. Now both babies were fighting for their lives. What followed would be a 44-day chemotherapy battle in which they sometimes became so weak that they couldn’t breathe without the help of a ventilator. While the CHM staff worked around the clock to keep them going, the combination of cancer-fighting drugs prescribed by Dr. Taub slowly began to take hold. Within a month of their admission, it was clear that the tumors were receding and that the “chemo strategy” had begun to work.

And then, on a sunshine-bright morning in October, the once-unthinkable event finally took place: Michael and Alissa Dunn wrapped their two baby girls carefully in blankets and took them home to their pleasant little green-shuttered bungalow in Grand Blanc. “It was a little hard to believe at first,” says Michael today. “Our prayers had been answered, and their future looks good. There are no guarantees in this life, of course – but our little girls are home again, and we thank God for that every single night.” Adds Alissa: “We can’t thank the staff at Children’s enough. They were absolutely fabulous. We couldn’t have asked for a better group of doctors and nurses; they treated our girls like their own. I can’t tell you how many times nurses who had already finished their shifts elsewhere would drop by for a visit – on their own time – just so they could find out how our babies were doing!”

And Jeffrey Taub? “I’m really proud of our team, and I’m especially grateful to Dr. Xavier, who has worked closely with me in treating the twins,” he will tell you with a smile of sheer delight. “After years of experience, in fact, the entire oncology team at Children’s works together beautifully. Somehow, they found the space that was needed to give the two girls their own crib, so the twins could recuperate together, and they never stopped hovering over them. They gave them the same kind of devoted attention they’d give their own kids.

“Madeline and Isabella – they’re both doing very well these days. They’ve been through four rounds of chemotherapy by now and they’re eating and sleeping much better as a result. We’re guardedly optimistic at this point and right now, we have every hope that they’ll go on to live normal, healthy lives.

“For a pediatric oncologist with three kids of his own . . . well, it just doesn’t get any better than that!”