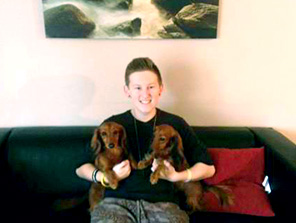 At the age of 4, Mark started experiencing terrible headaches. His mom Ann became concerned when he had his first episode that included not only headaches but pale skin and vomiting which led him to the local emergency room.

For 12 years, Mark continued with severe headaches, sometimes on a daily basis. Diagnostic tests including CT scans and an MRI were normal. Local doctors suggested Mark suffered from migraines. A number of treatments were tried including dietary changes and medications, but nothing seemed to work and many medications had significant side effects including dramatic weight loss for Mark.

Mark had a family history of migraines on both sides, but Ann’s instinct told her Mark may have something else going on.

“There were times when Mark would be confused with slurred speech. He also had a strange stare and wanted to go to sleep,” Ann says.

A chance encounter with a new hair stylist led to a dramatic turn of events.

“I went to a new hair stylist and explained Mark’s situation as well as the frustration that the treatment was not working. The hair stylist said a family member went through a similar situation and she had great success at Children’s Hospital of Michigan,” says Ann.

She immediately called the hospital and arranged an appointment for Mark to been seen by Lalitha Sivaswamy, MD, neurologist on staff at the Children’s Hospital of Michigan.

After Ann explained several symptoms to a neurology nurse at Children’s Hospital of Michigan, she commented that the symptoms may be associated with seizures.

Mark had experienced one grand mal seizure in 9th grade but local doctors suggested the episode was isolated.

Dr. Sivaswamy had Mark undergo a 24 hour EEG to monitor for seizures.

“I received a call from Dr. Sivaswamy that there was seizure activity during the procedure. She said she thinks Mark was not having migraines, his symptoms all those years had been due to seizures,” Ann says.

Overwhelmed but encouraged that a diagnosis was finally made, Ann and Mark listened to options for treatment that could include anti-seizure medication and surgery.

The EEG confirmed that Mark had focal seizures on the left temporal lobe of his brain. After hearing the options and learning that 80 percent of focal seizures can be treated successfully, Mark was on board with having surgical treatment performed.

“We then get a vivid, colorful mapping of the areas of the brain involved in motor, vision, hearing, speech, and memory. These important areas are preserved to minimize the risk of functional deficits following brain surgery. The seizure focus turns pink on the screen when a seizure occurs. This process pinpoints the seizure focus to be removed by the surgeon.”

Dr. Sood performed the surgery to remove the affected area of the brain responsible for Mark’s seizures and the treatment was successful.

“The surgery was done in two stages. This was especially important since we had to define the speech area of the brain which we knew was in close proximity to the part of the temporal lobe responsible for the seizures. During the second stage, the left temporal lobe that was causing seizures was removed to preserve the speech area. Without surgery, Mark would not only have needed to be on seizure medicine indefinitely but also have consequent effect on brain development from persistent intractable seizures, says Dr. Sood.”

Dr. Luat who is managing Mark’s care, said the results of the treatment are very encouraging.

"Mark should still continue his seizure medications for at least one year or so. We also do not stop medication right away but we wean them first. In general, we consider weaning off seizure medication if after a year, the child is completely seizure-free and aura-free after surgery, and if the follow up EEG does not show evidence of seizure susceptibility. The prognosis for Mark to be seizure-free following his surgery is as high as 80% which is excellent," says Dr. Luat.