Clarkston Teen on Road to Recovery after 22 Surgeries 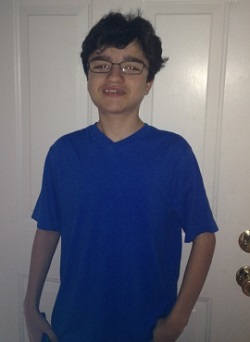 Amy Altman of Clarkston always felt prenatal care was important so when she was 19 weeks pregnant with her second child, she went in for a routine ultrasound at her local doctor’s office. The ultrasound, however, gave a glimpse that the pregnancy was going to be anything but routine. “The technicians performed several ultrasounds and found my son had an enlarged bladder and problems with his kidney,” she says. Further testing indicated that Amy would probably deliver early. Doctor’s recommended that she deliver at DMC Hutzel Women’s Hospital to improve coordination of care where her son could immediately be evaluated and treated at DMC Children’s Hospital of Michigan.

The news was shocking to Amy and her husband Lloyd. Sure enough, Matthew was born 10 weeks early via c-section weighing less than four pounds. Matthew was immediately taken to Children’s Hospital of Michigan where doctors determined he had VACTERL Association, also known at VATER. VATER describes a pattern of related birth defects involving three or more of the following: vertebrae (spine), anus and rectum, heart, trachea (windpipe), esophagus, radius (bone of the arm), and kidneys. Infants can have any combination of features and there is a wide range of severity. Survival and complications related to VATER depend on the severity of disorders in each case.

Matthew’s conditions included a tracheal esophageal fistula, kidney problems, and a missing vertebrae at the tailbone.

Matthew, who was born in 1999, had his first of many surgeries within hours of birth to correct several of the defects associated with the syndrome. At age six, Matthew required a kidney transplant because one of his kidneys never grew to function appropriately and the second one began to fail.

Despite the severity of his condition, the Altman’s felt fortunate that Matthew was at a hospital that provided exceptional care and treatment. “It’s a long drive to Children’s Hospital of Michigan from our home in Clarkston, but we wouldn’t take him anywhere else,” says Amy. With Matthew being in and out of the hospital for most of his life, Amy says the family has formed a special trust and bond with staff, most notably Paul T. Stockmann, MD, pediatric surgeon on staff at the Children’s Hospital of Michigan, who was at the hospital to perform Matthew’s first surgery. “Dr. Stockmann has been with us from the very beginning and has done 15 or 16 of the 22 surgeries Matthew has required throughout his life. He has known Matthew his whole life and jokes with Matthew about little things like always having his favorite snack around which happens to be barbecue potato chips,” she says.

Matthew and his family did receive very encouraging news in August of 2013 when his feeding tube was removed. It’s been a long journey, but the hope is all of his major surgeries are behind him and he can look forward to doing what many typical 14-year-old boys like to do including playing video games, going to the movies and enjoying music with his iPod.

Dr. Stockmann says despite being born with multiple life threatening congenital anomalies, Matthew and his family have shown strength. “He has endured a great deal during his short life. They have demonstrated great courage and resilience during this journey and we are all very pleased that Matthew is doing so well. They have inspired us!"

Amy says Matthew may be happy that no more major surgeries are scheduled, but he is a little sad about not having to stay in the hospital for one main reason. “He said he is going to really miss the teddy bear waffles that they serve when he is in the hospital. He said to me, mom they are so good, they just don’t make them like that anywhere else.”