Diagnosed at birth with Hemophilia A, Mohamed of Dearborn, Michigan has endured the challenges of living with the disorder including joint paint, arthritis and excessive bleeding in his left ankle.

The genetic condition causes the blood to not clot properly, which can result in bleeds in the muscles and joints that may lead to joint damage and chronic pain.

“We have all gone through this together so we have a good support group and help each other with encouragement to get through the complications,” he says.

Mohamed has been treated for Hemophilia A at Children’s Hospital of Michigan since birth and recently benefited from a new medicine Hemlibra approved by the U.S. Food and Drug Administration (FDA) in October, 2018 to prevent or reduce the frequency of bleeding episodes in adults and children, ages newborn and older, with hemophilia A without factor VIII inhibitors. Hemlibra is the first and only approved medicine for hemophilia A, with or without factor VIII inhibitors, that can be self-administered under the skin and only once weekly, every two weeks or every four weeks. 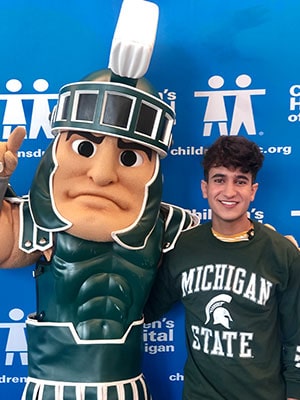 “The new treatment has made a big difference. I only have to administer the medicine once a week vs. twice a week and it is much easier to use,” Mohamed says.

Bulent Ozgonenel, M.D,  hematologist oncologist at Children’s Hospital of Michigan says  Hemlibra has brought a positive fundamental change in the treatment of Hemophilia A.

“Many of our patients who used to have frequent bleeding episodes while on standard factor treatment have infrequent bleeding now. The convenience of self administering under the skin less frequently is greatly appreciated by patients,” says Dr. Ozgonenel.

Meera Chitlur, M.D,. hematologist oncologist at Children’s Hospital of Michigan who is part of the care team that has treated Mohamed says it is gratifying to see how Mohamed has persevered despite having Hemophilia A.

“Having a life long bleeding disorder is challenging for the whole family. Often, children get lost in the day to day of hemophilia treatment and bleeding and pain and do not get the opportunity to grow and flourish like normal kids. Mohamed has endured his disease and has not allowed it to take over his life. He has worked hard to realize his dream of college and a career in public health. He has proved that nothing can keep him from achieving his goals! Mohamed is a role model for our patients and we wish him the best in life today and always!” she says.

The future is looking very bright for Mohamed, who graduated from Edsel Ford High School in Dearborn and has received a full ride to Michigan State University.  He says he is still young and not sure of what he wants to pursue but hopes to help others and plans to study global public health.

“When I see others including younger family members with this disorder I try to encourage them to take it one step at a time. It can be scary but you will get through this and feel fine,” says Mohamed.

He is also very grateful for the staff at Children’s Hospital of Michigan who has managed his Hemophilia A.

“The staff is like family to me. I am so thankful for the excellent care. I love the doctors and nurses who have big smiles on their faces and have helped me throughout my life.”