As a severe asthmatic, 9-year-old Noah has needed multiple treatments and hospital visits over the course of his life to manage his condition.

Because of this, it was not surprising to Noah’s mom Nicole, when in February of 2020, he was having significant respiratory issues that warranted admission to a local hospital for evaluation and breathing treatment.

Noah is one of 7 children as part of a blended family and Nicole, who was sick at the time, asked her mother Nanette to accompany Noah to the hospital.

“My mom kept me informed throughout the process but I was worried that he was not responding to treatment. Noah is one of the sweetest kids you would ever meet and when I talked to him over the phone, despite feeling terrible, he just told me how much he loved me and that I was the best mother ever,” a teary eyed Nicole remembers. 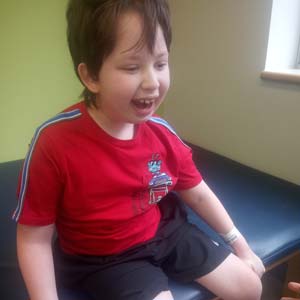 Despite his condition, Noah was determined to get better. His birthday was coming up five days after his hospital admission and Noah said to Nicole that he had to be better for his birthday.

Unfortunately, over the course of the next month, Noah’s condition deteriorated rapidly.

“He was intubated several times and was not responding. He wouldn’t open his eyes or move his limbs. My gut instinct told me this was very serious,” says Nicole.

Noah tested positive for influenza A. An MRI revealed that Noah had encephalitis (inflammation of the brain) caused by the flu.

“I was devastated and not prepared for that. At that point, I did not know if Noah would survive. I had people from coast to coast praying for Noah,” says Nicole.

During this time Noah was evaluated by a team of inpatient rehabilitation specialists at Children’s Hospital of Michigan to transition his care to the hospital.

Noah was taken by ambulance to Children’s Hospital of Michigan and despite a few setbacks, he began to steadily improve.

Nicole said she was extremely appreciative of the entire inpatient rehabilitation staff at Children’s Hospital of Michigan including nurses, therapists and physical medicine and rehabilitation physician, Dr. Christina Santia who was so supportive and who Nicole credits with getting Noah to be responsive.

“When I first met Noah I knew we needed to prepare his family for a marathon recovery that would include many ups and downs.  Noah’s encephalitis left him unable to move his arms and legs, unable to keep his head upright, and although he was awake at times he was unable to open his eyes or communicate.  Throughout his stay, Noah gradually became more awake, gained strength, and found his voice.  Noah has worked incredibly hard to meet his goals and continues to impress the entire rehabilitation team.  We are so proud of the strength and bravery he has shown,” says Dr. Santia.

To see how Noah has progressed from when he was first admitted to the hospital is something that Nicole believes is a miracle. 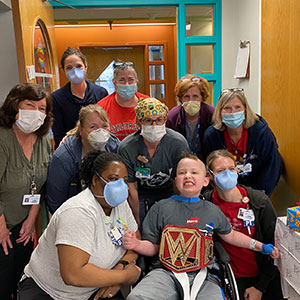 Noah’s vision has been impacted due to probable nerve damage and his vision comes and goes but specialists are hoping that his vision will return with the right glasses.

He is expected to continue with outpatient rehabilitation including occupational therapy, physical therapy and speech therapy twice a week at Children’s Hospital of Michigan.

For others who may be going through a similar situation, Nicole has a few words of wisdom.

“Never give up. To see my little boy with a heart of gold laying there unresponsive and looking like his body was a shell, I had little hope that he would survive or have any quality of life. Thanks to his extensive rehabilitation treatment and the power of prayer, Noah has made dramatic progress. He talks, answers questions and makes jokes. He is also beginning to sit for short periods of time without support and is learning to feed himself. His recovery has been dramatic” says Nicole.