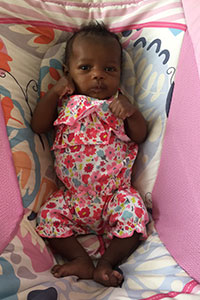 “When I think back to that time, I get sad all over again. I could have lost my baby, but I thank God and Children’s Hospital of Michigan. They saved her life,” says Porsha Gibson.

No one had any idea how sick Porsha’s daughter, Paris, was when she was born nearly five years ago. It was a normal pregnancy and a normal delivery but as the weeks passed, Porsha noticed that Paris had a yellow-ish tint to her skin, her belly was distended and she was scratching a lot. Other family members commented on how the whites of her eyes looked tan.

“I was in absolute shock when they diagnosed her with cirrhosis of the liver.” I thought this was something associated with a heavy drinker, not a three-month-old!” 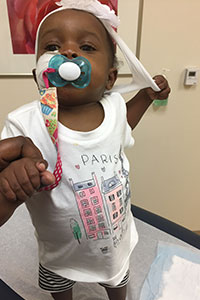 Paris was immediately put under the care of Najeeb Zoubi, MD, medical director of the Pediatric Liver Disease and Transplant program at the Children’s Hospital of Michigan. She spent the next few months in and out of the hospital as they monitored her disease. Dr. Zoubi recommended a liver transplant.

“It was such an up and down time – I was happy that they put her as a top candidate on the transplant list but I still couldn’t believe all this was happening. And then, when we got that call on December 8, 2019 that there was a liver, this was it.” 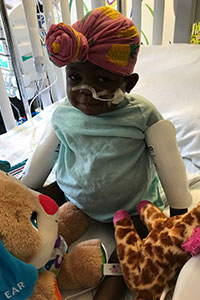 Unfortunately, that liver wasn’t a match for Paris and she was put back on the list. But they didn’t have to wait long for a second call on January 23, 2020. Dr. Zoubi felt this liver would be a perfect match to Paris, and he was right.

Porsha says the transplant surgery lasted about eight hours and even as her daughter was waking up in recovery, she could tell she was in such a better place.

“I was like, oh my gosh, her skin color is normal!  She even tried to sit up and talk. My little girl was perfect.” 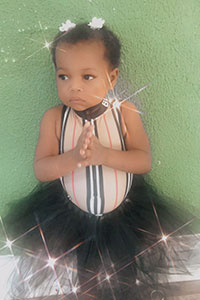 Paris spent the next few months in the Neonatal Intensive Care Unit (NICU) at Children’s Hospital of Michigan. Porsha says that during their stay, the care they both received was outstanding. There was one nurse assigned to Paris throughout her stay, who was there for whatever they needed. Porsha says he would even come in on his days off to check on them.

After two months, they were able to go home and did regular follow-up visits with Dr. Zoubi. Now, four years later, Paris is a spirited girl who loves to play games, color, read and play with her four sisters. She’s even getting ready for kindergarten next year.