As a young child, Roberto Novelli of Redford, remembers wanting to play sports. But after being diagnosed at the Children’s Hospital of Michigan with hemophilia A around 3 months of age, routine kid activities like playing sports were worrisome to his parents who were very protective and wanted to make sure a major injury or fall would not lead to life-threatening bleeding. 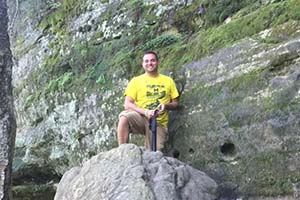 Hemophilia A means a person’s blood does not clot properly, which can result in bleeds in the muscles and joints that may lead to joint damage and chronic pain. Roberto, who does not have a family history of hemophilia, said the disorder had a major impact on his life.

To manage his disorder, he received three infusions of treatment into his veins each week to try to prevent bleeds. In 2017, his doctor, Michael Callaghan, MD, hematologist at the Children’s Hospital of Michigan DMC, recommended that he join a clinical trial for Hemlibra® which was being studied as a preventative treatment for people with hemophilia A.

Roberto, now 26, who is an academic advisor at the University of Michigan-Dearborn, a graduate student and an active young adult, says the new treatment has made a major positive impact on his life.

“I was used to receiving infusions three times a week but it impacted many things like having treatment while traveling. Since taking Hemlibra, I have fewer bleeds and only need treatment once a week. I am very happy I enrolled in the trial and am part of this revolutionary treatment that has helped me and will help others tremendously with Hemophilia A,” he says.

In October 2018, the U.S. Food and Drug Administration (FDA) approved Hemlibra to prevent or reduce the frequency of bleeding episodes in adults and children, ages newborn and older, with hemophilia A without factor VIII inhibitors. Hemlibra is the first and only approved medicine for hemophilia A, with or without factor VIII inhibitors, that can be self-administered under the skin and only once weekly, every two weeks or every four weeks.

Dr. Callaghan says the FDA approval of this medicine is a major advancement for patients like Roberto in improving the management of Hemophilia A. 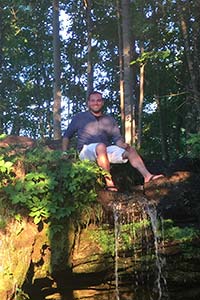 “At Children’s Hospital of Michigan we had several patients on 4 studies of patients with hemophilia A that demonstrated Hemlibra prevented bleeding better than any current therapy,” says Dr. Callaghan.

“Most of the patients on the studies experienced zero bleeds during the study period. All of the current therapies require intravenous infusion several times per week while Hemlibra is given subcutaneously like an insulin shot weekly or even as infrequently as monthly. This is a big advance in hemophilia treatment and I’m thrilled it is now approved for all people with hemophilia A and am proud of the role our team at Children’s Hospital of Michigan played,” he adds.

Roberto says although he was a little hesitant initially, he is thankful to Dr. Callaghan for introducing him to this medication and enrolling him in this study.

“I have not had any major side effects and I get to spend more time outdoors enjoying nature and less time taking my medicine. I am also thankful for the life-time treatment I have received and continue to receive at the Children’s Hospital of Michigan. I still know nurses from when I was a young child and feel like they are part of my family.”

For further information on blood disorders visit hematology oncology services at the Children's Hospital of Michigan or request an appointment.