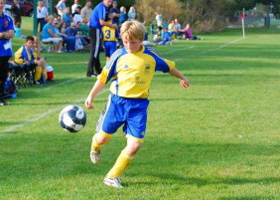 The day started nice enough for seven-year-old Steven Soboslay, who was excited to spend a summer day in June of 2007 with his cousin and grandfather at a community beach.

Steven enjoyed doing some fishing and ended his day at the beach by taking a trolley to the parking lot like thousands of others had done before him.

The trolley, which was traveling at about 10 miles per hour, hit a bump in the road and in a matter of seconds, Steven’s trip that day took a drastic turn as he headed by ambulance to an emergency room fighting for his life.

“Steven was sitting at the end of the trolley with his grandfather and when the trolley hit the bump, he flew off the trolley and was run over by the back wheels,” says his mother Marilyn Soboslay of Harrison Township.

As the accident was happening, Marilyn called her father to check and see how the day was going. “I happen to call when the accident occurred and my dad was very calm but told me Steven had fallen off of a trolley and may have broken his arm. He said I should probably meet them at the local hospital.”

Little did she know at the time that the injuries were much more serious than a potential broken arm. “I was trying to hold it together as I saw my son who was bleeding all over the place and I could see the tire tracks on his body,” recalls Marilyn with great emotion.

Doctors at the hospital suggested that Steven be transferred to DMC Children’s Hospital of Michigan due to the extensive injuries he was suffering from. Steven experienced five broken ribs, second degree burns, a ruptured spleen and a left lung contusion.

“I was overcome with emotion but as soon as we got to the Children’s ICU and I witnessed the nurse completely on top of things, I felt more at ease that we were going to get through this,” she says. Steven spent eight days at Children’s Hospital of Michigan and Marilyn credits much of the staff including the trauma coordinator and the pediatric surgeons with helping her family cope with the terrible accident.

“Whether it was the staff that came in with bubbles and video games to calm Steven who had to be on strict bed rest and could not move, or the doctors who exuded the confidence needed that made me feel we could pull through this together or the trauma coordinator who was a Godsend and patiently put up with my continued calls for one month after Steven was discharged to answer all of my questions, I felt very thankful for the exceptional care at Children’s.

According to Marilyn, the exceptional care extended beyond Steven as the staff at Children’s ensured the entire family’s needs were taken care of including preparing her two younger children with the transition needed after Steven was discharged from the hospital. He was required to be on bed rest for an additional four weeks. Marilyn stayed alongside Steven for the first five days and was also appreciative that the staff helped accommodate her needs throughout the hospital stay. 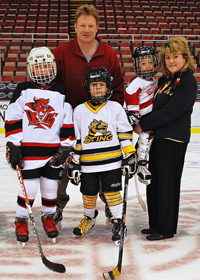 Fortunately for Steven and his family, this story does have a happy ending. Three years later, Steven is quite the athlete according to his mom, playing hockey nine months out of the year and plays soccer all year round. “He is truly a star soccer and hockey player and you would never know other than a few scars from his burns that the accident ever happened.”

Marilyn hopes this tragic accident does not ever happen again to any other child but is quick to point out that management at the beach took the accident very seriously. Precautions included installing ropes on either end of the trolley and repaving the road where the bump was to prevent this from ever occurring in the future.

“Steven lost that summer spending his time at the hospital and recovering but we are happy that precautions have been taken at the beach to prevent this type of tragedy from happening again.”