Sydney of Commerce, Michigan is a very active little girl keeping her mom Stacy and dad Jason busy with her interests that include music, soccer and volleyball. So it was a big surprise when Sydney’s music teacher called Stacy expressing some concerns. 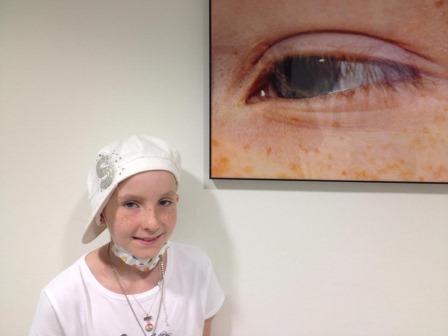 “The teacher called me to say he sees about 400 music students and was concerned that Sydney looked quite pale compared to other students,” Stacy says.

Sydney did not have any other apparent symptoms of health issues but Stacy took Sydney, who was then six-years-old, to her local pediatrician to express the teacher’s concern. Tests revealed the distressing news that Sydney had acute lymphoblastic leukemia (ALL), also known as acute lymphocytic leukemia, a type of blood cancer.

Sydney was then transferred to Children’s Hospital of Michigan, where she received chemotherapy to treat the disease.

“We were devastated but after the initial shock we became Sydney’s cheerleader focusing on the fact that she can fight this and win,” Stacy says.

The treatment appeared to work but when Sydney was nine-years-old she developed a big bruise after falling into a sofa that caused concern. Further testing showed that her leukemia had returned.

Roland L, Chu, M.D., hematologist/oncologist, on staff at Children’s Hospital of Michigan, consulted with several experts and determined a bone marrow transplant would provide her the best chance for survival. 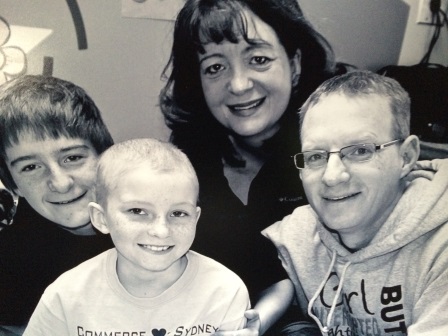 “That is why I wanted to give the family the recommendations of some other leukemia specialists around the country, and my review of available medical research literature. I think it is essential to involve the family in the process as they must be comfortable with the decision as well. Based on long conversations presenting all the treatment options, the family and I felt a bone marrow transplant was the best option for Sydney,” Dr. Chu says.

To get her into a second remission and hopefully improving the chance of cure, Sydney was enrolled in a clinical trial through the Children's Oncology Group to use a newer medication in combination with standard chemotherapy. The goal of the study was to see if the new medication would improve rates of achieving remission since recurrent leukemias are at higher risk of not responding to standard chemotherapy. It was also essential to achieve a remission since time was needed to find a bone marrow donor.

Sydney's immediate family was tested, and unfortunately no one was a match. A unrelated donor search was then initiated through Be the Match, operated by the National Marrow Donor Program® (NMDP). They were able to identify a 10 out of 10 match, which is the best match achievable.

In preparation for Sydney’s bone marrow transplant she received visits from Jenny Fox, art therapist, who is part of the Child Life staff at Children’s Hospital of Michigan. Child Life services offer support such as music and art therapists to help children cope with their emotions, adapt to new physical restrictions after trauma and find comfort in safe, calming distractions during treatment.

Sydney loves arts and crafts, and Jenny quickly developed a rapport with her. During Sydney’s stay at the hospital to prepare for the bone marrow transplant, Jenny brought in a camera and suggested that she may want to document her transplant with a camera.

“Art provides patients an opportunity to have a voice and have control over situations where they don't often have control. In Sydney's case, this was a rare opportunity for us, the viewers, to see from her point of view just what the day of her transplant looked like. This was an excellent example of taking the power/fear/anxiety out of a situation, by providing an avenue for control and empowerment over the situation," Jenny says.

Photography can be much less threatening and often easier to talk about than asking the patient to describe or talk about something in their own words. It was especially helpful on the day of the transplant according to Stacy.

“It is a very long day when there are high levels of anxiety with issues such as whether the transplant will work. We found that having Sydney and her brother take pictures during the process took their mind off of the procedure. Sydney now has a photo book available on her journey that she can keep forever and share with others.”

An exhibit of Sydney’s photos, “See Into the Hospital,” were recently displayed by the hospital cafeteria and several are now part of an exhibit on the healing power of art at a downtown Detroit gallery. 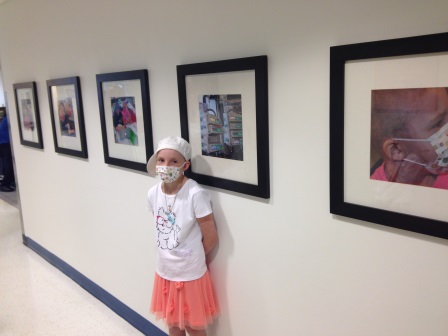 Stacy is happy to report that Sydney is doing great after celebrating one year of having her bone marrow transplant. She has gone back to all of her busy activities and has made life-long friendships with the staff.

“We are so appreciative of the nurses, doctors and Child Life staff who made such a difficult situation bearable. Even though Sydney is happy to not be in the hospital, she looks forward to seeing the staff for follow up visits because of the friendships she has developed. We will always be grateful for the life-saving treatment and care she received including Child Life services which is such a wonderful resource for patients and their families.”