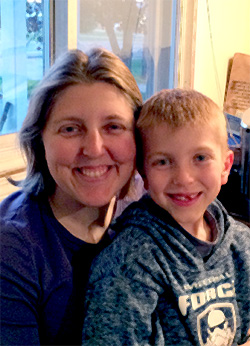 “The doctors told my parents there was no place locally that could adequately treat my condition and it was recommended that I go to the Children’s Hospital of Michigan,” she says.

At just one-week-old, Tasha had surgery to repair an interrupted aortic arch, a rare complex cardiac disorder in which the aortic arch is not fully developed and has a blockage. This blockage was repaired by congenital surgeons using her own artery that goes to the brain and arm. This was the first of four surgeries Tasha would undergo at the Children’s Hospital of Michigan DMC to repair her complex congenital condition.

At age two, Tasha had open heart surgery to repair a ventricular septal defect (VSD), sometimes referred to as a hole in the heart, in which there is an abnormal opening in the dividing wall between the main pumping chambers of the heart (the ventricles). Tasha was monitored yearly as a child and at age 10, she underwent another open heart surgery for subaortic stenosis, a narrowing in the region below the aortic valve in the heart that releases blood to the body.

Despite three heart surgeries as a child, Tasha led a pretty normal life without too many restrictions.

“I could go for walks and ride my bike without problems but was told not to lift weights since this could cause a strain in my heart, or run marathons, which is something I don’t think I’d ever do anyway,” she says.

Tasha got married in 2000 and a few years after that she and her husband began discussing starting a family.

She spoke with her cardiologist at the time, who told her that becoming pregnant could be dangerous given her heart condition and heart surgeries.

Tasha had a tricuspid aortic valve but it was fused at the bottom of the leaflets so it didn't work properly. She received a prosthetic, metallic valve which required life long use of blood thinner medication so that a clot would not form on the metallic valve.

After a detailed consultation including a congenital cardiologist, obstetrician and anesthesiologist, Tasha was given a green signal to conceive and she had two sons over a three year period. Blood thinning during pregnancy was maintained using daily injections as the medications taken by mouth can be harmful for the baby. Both of her sons received fetal echocardiograms during fetal life to thoroughly check their heart structure and function.

Tasha’s younger son Caleb was born at about 32 weeks gestation with no indication of heart abnormalities on fetal echocardiogram. In 2015 during an annual checkup, it was discovered that Caleb had a heart murmur. Further testing showed that just like his mother, he had bicuspid aortic valves (BAV), but unlike his mother he did not have the blockage in the aorta and other serious findings. In people with BAV, the aortic valves have only two cusps instead of three. This kind of valve can malfunction and either impede blood flow from the heart to the aorta or cause leakage backwards into the heart.

Fortunately, the condition is mild and needs follow up but it is not impacting Caleb in his daily activities. Children's Hospital of Michigan provides family centered care, and conveniently Caleb along with his mother routinely sees Pooja Gupta, M.D., pediatric cardiologist who is board certified in adult congenital heart disease and is the director of the DMC Michigan Adult Congenital Heart Center (MACH), which provides multi-disciplinary care for adults with congenital heart disease.

“Caleb has bicusid aortic valve which belongs to the same family of left sided obstructive disease as his mother, but she had the more severe form of this condition. Both of them will require life long care. Caleb will be monitored for development of narrowing or leakage of this valve and or enlargement of the aorta. Based on the 2008 American College of Cardiology/ American Heart Association guidelines, Tasha should receive life long care with a cardiologist with expertise in adult congenital heart disease (ACHD) and fortunately we can provide that here at MACH,”says Dr. Gupta.

Tasha says over the years she has really appreciated the expertise of pediatric cardiology specialists at the Children’s Hospital of Michigan as well as more recently at MACH where cardiologists who specialize in adult congenital heart issues manage her care.

“Both Caleb and I may require some treatment and monitoring by specialists but luckily we’re not really missing out on anything important and can lead pretty normal lives,” Tasha says.