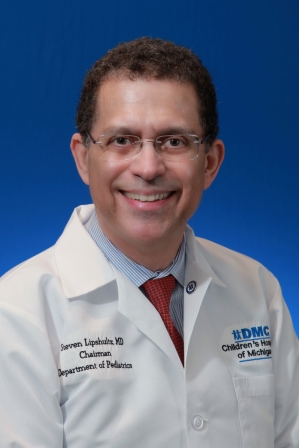 DETROIT, Mich., May 12, 2014 -- After two decades of arduous research, a National Institutes of Health (NIH)-funded investigator at the Children’s Hospital of Michigan (CHM) at the Detroit Medical Center (DMC) and the Wayne State University School of Medicine has published a new study showing that many children with an often fatal type of heart disease can recover “normal size and function” of damaged sections of their hearts.

The finding by Children’s Hospital of Michigan’s Pediatrician-in-Chief  and Wayne State University Chair of Pediatrics Steven E. Lipshultz, M.D., F.A.A.P., F.A.H.A., clearly demonstrates that nearly one-fourth of children treated for “idiopathic dilated cardiomyopathy,” or DCM (also known as “congestive cardiomyopathy,” when these children with DCM become symptomatic by developing congestive heart failure) can be expected to fully recover normal size and function of left-ventricular (LV) heart muscle fibers within about two years of diagnosis.  (LV muscle chamber size is dilated and LV function is reduced and weakened; these two abnormalities are the findings of DCM in children.)

The breakthrough from Dr. Lipshultz’ team of pediatric cardiology researchers, published in the April 15 issue of the authoritative Journal of the American College of Cardiology (JACC), also represents a major step forward in better understanding two of the key factors that determine survival-without-heart-transplant among children who struggle with this form of chronic heart disease, he said.

“Until now, investigators have known relatively little about specific outcomes among children who are diagnosed early with DCM,” said Dr. Lipshultz, who led the effort to found the nation’s only registry of pediatric cardiomyopathy cases (the NIH-funded North America Pediatric Cardiomyopathy Registry, or PCMR, established in 1994).

“But this new study is going to help change that, because it provides some revealing metrics showing that more than 22 percent of DCM-diagnosed children can be expected to regain normal heart size and function, with appropriate medical treatment and management of their condition.”

Dr. Lipshultz said the recently published JACC study has the potential to provide “a new sense of hope and a new opportunity for more effective treatment in the future” for children diagnosed with DCM, which affects more than 100,000 children and adults worldwide (about 30,000 of them in the U.S.). Globally, DCM is the leading cause for heart transplantation in children and adolescents from 2 to 18 years of age.

“The really exciting thing about this study is that it gives us a way to begin predicting which children diagnosed with DCM are most likely to survive the disease with normal heart size and function,” he added.  “Knowing how to predict that could also be crucial in determining which children can be expected to survive without requiring heart transplants – a breakthrough that could allow clinicians to reserve that extremely complex and physically demanding procedure for those patients who need it most.”

The study was also authored, Dr. Lipshultz noted, by James D. Wilkinson, M.D., who directs the administrative coordinating center of the National Heart, Blood, and Lung Institute Pediatric Cardiomyopathy Registry. Dr. Wilkinson will be joining the Children's Hospital of Michigan as the Associate Director of the Children's Research Center of Michigan and Wayne State University School of Medicine as a Professor of Pediatrics as of June 1, 2014.

While describing the new JACC study as “another compelling example of how the Children’s Hospital of Michigan is leading the way in providing high-quality pediatric care through advanced medical research,” Children’s Hospital of Michigan CEO Larry Gold said it also shows how Dr. Lipshultz’ appointment last fall as the hospital’s pediatrician-in-chief is already beginning to pay “significant dividends” in pediatric research.

“Dr. Lipshultz is an internationally recognized leader with vast experience in his field of pediatric cardiology research,” said Gold, “and he’s been the principal investigator of several landmark studies on the causes and treatment of cardiomyopathy in children.  His numerous clinical studies have also established the efficacy of therapies that can prevent heart disease in children with HIV and with cancer.”

Wayne State University School of Medicine Dean Valerie M. Parisi, M.D., M.P.H., M.B.A., predicted that the appointment of Dr. Lipshultz as chair of the school’s Department of Pediatrics last September will “continue to improve and strengthen what was already a very strong pediatric research program at Wayne State.

“This new study in the JACC represents an important step forward in our understanding of how young children with idiopathic dilated cardiomyopathy can often recover LV size and function,” she added. “Given Dr. Lipshultz’ extensive history as a researcher on pediatric cardiomyopathy and his national leadership role in building the PCMR, it’s clear that he’s well-equipped to lead Wayne State pediatrics and the Children’s Hospital of Michigan at the DMC into a bold new era of pioneering research in pediatric cardiology.”

The JACC study, “Recovery of echocardiographic function in children with idiopathic dilated cardiomyopathy: results from the pediatric cardiomyopathy registry,” looked at 741 children 18 years old or younger who had cardiomyopathy-linked “depressed left ventricular [LV] function” and “LV dilation. Based on echocardiograms conducted at original diagnosis and during the next two years, the study found that “at 2 years, 22 percent had recovered normal LV function and size; 51 percent had died or undergone heart transplantation and 27 percent had persistently abnormal echocardiograms.”

The study also noted that younger age and “less LV dilation” at original diagnosis were predictors of “normal LV size and function,” before concluding that children with DCM can recover successfully from the disorder – and that further investigation of recovery factors such as medial therapy or “ventricular unloading with assist devices” should be the next important steps in learning more about how children respond to DCM.

“As a pediatric cardiologist who’s spent more than 35 years conducting research on the causes and treatment of heart disease in children, I’m very encouraged by studies like the one that just appeared in the JACC,” said Dr. Lipshultz, who has received commendations from both the NIH and the U.S. Congress for his pediatric medical research.  “What those findings tell us is that we can use the tools of research to gain a much better understanding of which children with cardiomyopathy are likely to survive and return to normal heart-functioning, and which are more likely to require a heart transplant. Being able to make that kind of distinction could prove very helpful in custom-tailoring each child’s heart care for maximum benefit over a lifetime.”