DETROIT, Mich. (FOX 2) - 10-year-old Bryce Minhinnick was released from Detroit Children's hospital on Saturday after recently being diagnosed with Leukemia.

Bryce was admitted to the hospital on March 1 after his mom noticed that something was very wrong. She said he was pale, tired, had sunken eyes and shortness of breath.

"We took him to his pediatrician and he took one look at him and sent us right here," said Bryce's mom. "Within hours we were diagnosed and admitted and got treated right away, the very next day, we were starting chemo treatments."

His family says they didn't know what was happening to him. After extensive testing, Bryce got the diagnosis; Leukemia.

"One day your kid is a normal kid and then the next a whole nother world is introduced to you." 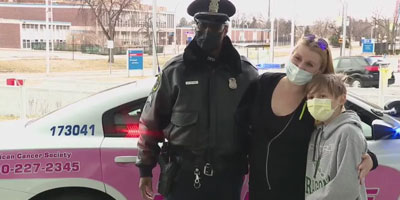 Bryce was able to leave the hospital on March 12th and was met with a special surprise from the people he looks up to.

A Detroit police sergeant in a vehicle waited for Bryce. He dreams of going into the military or becoming a police officer one day.

Bryce: "I'm gonna pull somebody over."

FOX 2: "What makes you wanna be a police officer?"

While Bryce was staying in the hospital, he got a special visit from Detroit Police Chief James White.

"That made me feel great because I got this coin from him," said Bryce.

Bryce got some other cool things to lift his spirits and to assure him he's got a lot of people in this fight alongside him.

"The Detroit Police Department is with him in this journey."

The 4th grader got a police escort from the hospital and is looking forward to the little things.

"Sleep in my own bed… these ones are kind of uncomfortable," said Bryce.

Bryce's mom says he has a long road ahead, but they're going to get through it together.

Bryce's mom also said he is participating in a St. Jude study that could help other children. She says he is reacting well to treatments, and they are staying very hopeful.