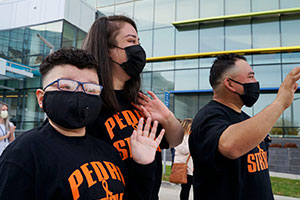 There is a tradition in pediatric oncology centers across the country. When a child is done with cancer treatment, they can ring a ceremonious bell, surrounded by friends, family and hospital staff.

On Friday afternoon, 11-year-old Pedro Martinez was able to ring that bell outside of Children's Hospital of Michigan in Detroit after twice beating cancer.

Pedro was diagnosed in July 2017 with Acute Lymphoblastic Leukemia, a cancer of the blood and bone marrow and the most common type of cancer in children. After receiving chemotherapy, it seemed like Pedro was better until he relapsed in December 2018.

"At the beginning, when they told us that he had leukemia, it was obviously something that no one wants to hear. That your son has cancer," Pedro's mother, Leticia Martinez, said. "But the second time — knowing what he went through the first time and now knowing that he had to go again. … Just seeing him go through it, it was really hard. Really, really hard."

Meret Henry, Pedro's doctor at Children's Hospital, said close to 90% of children who had Pedro's type of cancer are able to recover. Pedro continued to receive intensive chemotherapy until remission.

Then he had a bone marrow transplant "which really has only been done in the last few years" in July 2019, his donor being his father. 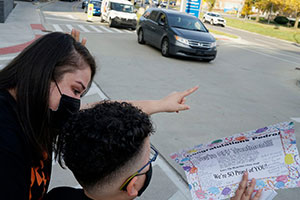 But then Pedro hit another issue. There was a complication after his bone marrow transplant that affected his skin, a problem the doctors dealt with for quite some time.

During all of this, Pedro spent months in the hospital. Not able to go to school or see his friends. When he was allowed to leave, he had regularly return to Children's Hospital. Back and forth, back and forth.

Bone marrow transplant recipients are at high risk of infection, leaving Pedro's parents and family to become vigilant about isolation and exposure. When the coronavirus pandemic broke out in Michigan, Leticia Martinez's nervousness shot up. She and her family stayed in their southwest Detroit home and limited visitors. Everything was kept clean.

"Every time I would go grocery shopping, I had to clean everything. Wash everything. I was just very cautious about what was coming in the house because I really did not want him getting sick," she said.

Doctors were concerned too. Henry reminded her patients' families to stay alert and limit outside exposure, noting that patients were already familiar with isolation before the pandemic. Doctors continued to wear protective gear, masks and shields during all patient interactions.

But Pedro was a resilient kid, Henry said.

"We sort of call him our ray of sunshine because he's always positive. He always has a smile on his face," Henry said. "He is a math whiz, he's a wonderful student."

"Even throughout this very difficult time, Pedro would come to see us and he'd be smiling."

Then, a month ago, Henry delivered the good news: Pedro was in remission and it was time for him to ring the bell.

"Finally, to hear those words, 'Your son is done with treatment.' It… was surreal. I was extremely happy," she said, adding she was grateful for Children's Hospital staff, from nurses to doctors to those who cleaned the room. 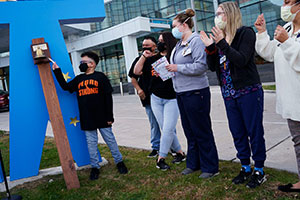 The bell is usually inside the hospital. But this year, it was moved outside to allow for a socially distance celebration.

About 40 people came to Pedro's bell-ringing Friday afternoon. Even camera crews from the news media came, which made him a bit nervous.

After pulling at the cowbell, Martinez was embraced by his parents, who wore black and orange shirts reading "Pedro Strong".

Friends and family drove by in a parade of cars, cheering and yelling for him. Some held posters and wrote encouraging messages on their cars. Hospital staff, even those who didn't work there anymore, were also present to wish him well for the future.

When the family got home, an ending to a difficult journey, Martinez turned to her son and asked him what he thought about seeing everyone that day.