Behind the numbers: What does the new lead study mean for Michigan children?

But how accurate are these numbers, and what is the state doing to fix it?

It’s important to note many of the children tested in this study, may have been already been deemed at risk for lead exposure, so it is a stretch to say ¾ of all Michigan children have detectable levels of lead, but still doctors say these results are a serious concern.

"No level of lead is safe. The level should be zero," said Dr. Kanta Bhambhani, Lead Poisoning Program Director at Children's Hospital of Michigan.

"We ourselves do not have the data, but a significant number of these children do have lead levels that are of great concern to us,” she said.

Dr. Bhambani points out that the results in the study, mainly come from children suspected of being exposed to lead, which could lead to higher percentages. The Michigan health department also says their numbers are lower, with just 2.5% of children tested in 2020 reporting elevated levels.

"The toxic effects of lead are essentially irreversible ... and the damage may not be realized until the child is older, when the child is in school with learning disabilities," said Dr. Bhambani.

The most common source of lead is from household paint. Lead was removed from paint in the late 70s, meaning older homes, pose more risk. It's a risk some families can’t avoid.

"It's not economically possible for many families to move out of a house that has lead paint," she said.

The difference is clear in state data, which shows a drastically different percentage of elevated lead levels in children throughout metro Detroit, from just .6 percent of those tested in Macomb County to 5.6 percent of kids tested in Detroit in 2020.

"As long as we have old housing and old paint that can not be gotten rid of, we’re going to have this problem,” said Dr. Bhambani.

It’s a problem the State of Michigan is hoping to solve inside the budget signed by Governor Gretchen Whitmer on Wednesday was millions of dollars set aside to replace lead pipes, and money to help remove lead from older homes. 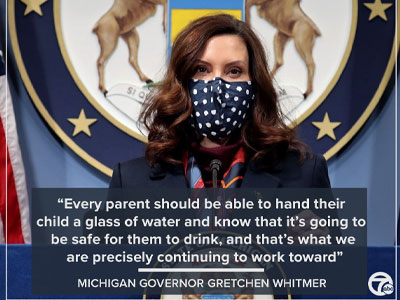 "Every parent should be able to hand their child a glass of water and know that it’s going to be safe for them to drink, and that’s what we are precisely continuing to work toward,” said Governor Whitmer.

As seen in the study, these efforts nationwide, have led to declining lead levels, but still, doctors say any level above 0, is way too high.

"Unfortunately we live in a highly industrialized society so we do have exposure to lead, but there is no level that is safe. It’s a very neurotoxic agent,” she said.

Overall, the study found detectable lead in half of us children, out of the more than one million that were tested.