After nearly 30 years of leadership in the battle against the chronic disease in Michigan, Dr. Wanda Whitten-Shurney will now play an expanded national role in shaping federal policy and guidelines aimed at lessening the impact of the genetically triggered blood disorder.

During her 29 years as a passionate clinician specializing in treating Detroit-area children with sickle cell disease (SCD) at the Children’s Hospital of Michigan,  Wanda Whitten-Shurney, M.D., has worked relentlessly to help kids and their families manage the chronic ailment while enjoying healthier, more active lives. 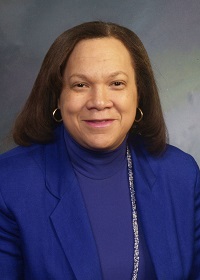 Now she’s being recognized for her long career as a pediatric physician who specializes in treating sickle cell disease (SCD).

That recognition took place recently in a Maryland suburb of Washington, D.C., when the nation’s major federal blood disease agency – the National Heart, Lung, and Blood Institute, a branch of the National Institutes of Health – named Dr. Whitten-Shurney to the advisory committee that sets goals and policy for the continuing campaign to better manage and perhaps one day cure the disorder.

SCD affects nearly 100,000 Americans. Although it can strike all ethnicities, the great majority of SCD patients are of African-American or Hispanic origin. The disease is inherited and is caused by a mutated gene that triggers the production of abnormal red blood cells. Patients with SCD often struggle with lifelong anemia, severe pain and shortened life spans.

Dr. Whitten-Shurney, assistant clinical professor of Pediatrics for the Wayne State University School of Medicine, will be formally installed as a member of the committee during its next regular meeting in June.

Her father – the late Dr. Charles F. Whitten – was a Children’s Hospital of Michigan pediatrician and Wayne State University School of Medicine professor who brought the nation’s attention to SCD and founded the Sickle Cell Disease Association of America. Dr. Whitten, a nationally recognized pioneer in the treatment of the disease, died at age 86 in 2008. As a leading SCD activist, he often focused on addressing psychosocial aspects of the disease.

Dr. Whitten-Shurney, who has served as the director of the Newborn Sickle Cell Screening Program at the Children’s Hospital of Michigan for many years, is the chief executive officer and medical director of the Michigan chapter of the SCDAA. During her career, she has treated more than 1,000 sickle cell patients, many of them for years at a time.

“As a physician who has spent most of her medical career helping to treat sickle cell patients, I am greatly encouraged and energized by this appointment to the NHLBI advisory committee,” she said. “Thanks to that appointment, I will now have a seat at the [policy-making] table – and a voice in helping to shape research goals for my patients.

“In recent years, we have made some inroads on a disease that causes immense suffering and shortened lives for tens of thousands of people in America every year,’ she added. “But there is still only one disease-modifying medication, hydroxyurea, and there is still no universal cure. We still have a great deal of work to do, if we’re going to one day lift the burden of suffering from sickle cell disease.”

Describing the groundbreaking research that now “offers increasing hope to SCD patients in Michigan and all across the nation,” Dr. Whitten-Shurney outlined recent breakthroughs in the development of new high-tech methods for bone marrow transplants. She also noted that the widespread use of the powerfully effective hydroxyurea helps extend patients’ lives and reduce suffering.

“Those of us who have been working in this field for decades have never been more hopeful,” she said. But she was also quick to point out that the treatment of the disease is complicated by “social problems related to the history of medical care as it has affected African-American communities in this country.”

Because of unethical medical experiments that were conducted on unknowing black patients in the past (including the notorious Tuskegee Syphilis Experiment of the mid-20th century), she said, African-American SCD patients often find it difficult to trust medical practitioners who recommend such state-of-the-art procedures as bone marrow transplants.

“One of the great tragedies that came out of the Tuskegee Experiment and others like it is the fact that minority patients are often afraid to receive effective medical treatment,” she said. “In the past, I’ve had patients tell me, ‘I don’t want to be a guinea pig!’ when I recommended that they take highly effective hydroxyurea for sickle cell.”

“As a member of the NHLBI Sickle Cell Advisory Committee, one of my first priorities will be to advocate for better communication and better educational outreach to the minority communities who are most affected by this disease. I’m quite passionate about that aspect – and I will continue to be inspired by my father’s pioneering role in this area once I join the committee and get to work.”

Reacting to Dr. Whitten-Shurney’s appointment, Children’s Hospital of Michigan Chief of Pediatrics and Chair of the Wayne State University Department of Pediatrics Steven E. Lipshultz, M.D., said that “her inspiring career as a compassionate treating physician speaks for itself. Dr. Whitten-Shurney continues to be a guiding spirit in the ongoing effort to make life better for sickle cell patients in Detroit and all across the state of Michigan.”