Tej Mattoo, M.D., D.C.H., F.R.C.P., F.A.A.P., professor of Pediatrics for the Wayne State University School of Medicine, has been appointed associate chair of the Department of Pediatrics. 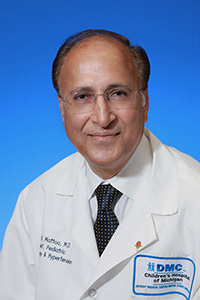 “Dr. Mattoo’s experience, coupled with his reputation in pediatric research, will definitely benefit the leadership of the department,” Dr. Sobel said. “He is a respected expert in pediatric medicine worldwide and is well respected by his colleagues in the School of Medicine and in the Children’s Hospital of Michigan.”

“I am honored and humbled by this appointment,” Dr. Mattoo said. “I appreciate the confidence entrusted in me to assist in leading this department, which is so critical to the city of Detroit and southeast Michigan.”

Dr. Mattoo joined the School of Medicine faculty in 1996 as an associate professor and was promoted to the rank of professor in 2002. He has served on the WSU Academic Senate and its Research Committees, the Human Investigation Committee, the Departmental Review Committee and the Research Strategic Planning Workgroup. A member of the Budget Advisory Committee for the school, he also serves on the Board of Directors of University Pediatricians, the National Kidney Foundation of Michigan Scientific Advisory Board, the Board of Trustees of the International Association of Organ Donation, Michigan, and the PREP Nephrology Advisory Board of the American Academy of Pediatrics. He is a founding member of the Steering Committee of the Midwest Pediatric Nephrology Consortium and serves on committees for the Children’s Hospital of Michigan Foundation, the American Society of Pediatric Nephrology and the National Institutes of Health’s National Institute of Diabetes and Digestive and Kidney Diseases.

Dr. Mattoo has received numerous research grants, including awards from the National Institutes of Health. He has written more than 150 publications and book chapters. He has lectured extensively nationally and internationally, and is the editor of PREP Nephrology, the journal of the American Academy of Pediatrics, and section editor of UpToDate, a journal of Pediatric Nephrology. His awards include research education, mentoring and teaching awards from the Children’s Hospital of Michigan, the Wayne State University College Teaching Award; fellowship in the Royal College of Physicians; and the NephCure Foundation Award for his research on kidney diseases. He is included in America’s Top Pediatricians, Best Doctors in America, Who's Who in America and Detroit’s Top Doctors.

He received his medical degree in 1979 from the University of Kashmir in India. He became a member of the Royal College of Physicians in London in 1983, and trained in pediatric nephrology at Guy’s Hospital in London and at the Albert Einstein College of Medicine in New York.