Skip to main content and our Accessibility Statement may be found in the footer of our website.
Back To Burn Center Stories 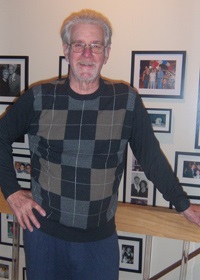 For 73-year-old Bill Briggs of Farmington Hills, DMC Children’s Hospital of Michigan and Tom Hayden, social activist, writer and former spouse of Jane Fonda will always hold a special place in his heart.

The reason? They both played crucial roles in saving his left leg.

Mr. Briggs, was four years old in 1942 when he decided to build a campfire with his friends in his hometown of Berkley, Michigan. As he started to walk away from the campfire, his friend said his leg was on fire. “I started to run which only fueled the fire and made it worse,” he recalls. A local neighbor Tom Hayden, who was about 12 at the time according to Mr. Briggs, reached out to him and put him on the ground to vent out the fire.

Mr. Briggs was seen by a local doctor to treat his leg but the treatment was not working and the local doctor suggested he be taken to DMC Children’s Hospital of Michigan. At the hospital, Mr. Briggs recalls doctors informed his family that he was the first patient in Michigan to receive a skin graft. “They took skin from below my belly button and grafted it on my leg which was burned from my knee to the ankle.”

Although Mr. Briggs says his leg does not look that pretty, it is fully functional and the treatment allowed him to serve in the Navy and as a firefighter for 25 years in Ferndale. Bill’s wife Bobbi Chess mentioned that he would hardly ever wear shorts because he was self conscious of the scar. “When we met, I convinced him that the scar was not something to be ashamed of or self conscious about, but something to be proud of and to be grateful to the doctors and nurses who were instrumental in his well being,” she says. “I’m happy he does wear shorts even though people never ask him or notice the scar.”

Bill is very appreciative to DMC Children’s Hospital of Michigan and has a special message for Tom Hayden. “I would love him to know that he not only saved my life but hundreds of lives since I served a quarter century fighting fires and saving people from those fires for so many years.”