Skip to main content and our Accessibility Statement may be found in the footer of our website.
Back To Burn Center Stories

Jennifer Gries of Saginaw, remembers her boys Brandon, 9 and Ryan, 7 were really looking forward to staying at their grandmother’s house on an August evening in 2009 because they hadn’t slept at their 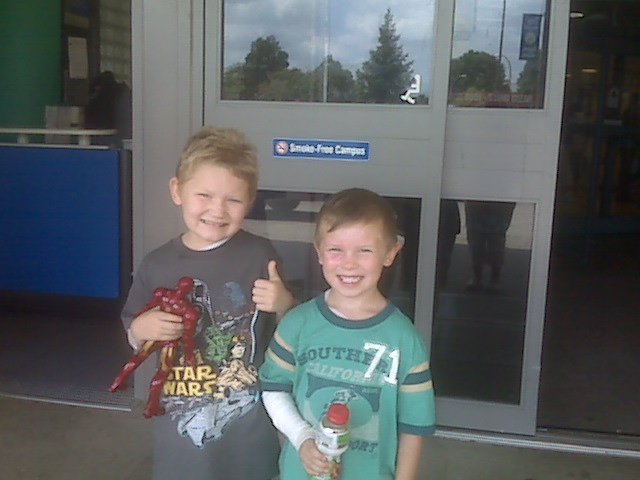 grandmother’s house for quite some time.

But a routine evening quickly turned tragic when Jennifer received a call from her brother around midnight. “My brother called a little after midnight and said there’s been a fire at my mother’s house. When my husband Scott and I rushed to our mom’s house we were in shock as we approached the house and saw the entire block was filled with smoke.” Visibly shaken, she and her husband ran toward the house to tell the firefighter that both of her boys, her mother and her mother’s fiancé were in the home.

Firefighters were able to rescue Brandon, Ryan and her mother’s fiancé but tragically, Jennifer’s mother did not survive. Jennifer and Scott rushed to the local hospital where Brandon and Ryan were taken by ambulance. Both boys suffered second and third degree burns and complications from smoke inhalation.

After being stabilized, they were air lifted via helicopter to DMC Children’s Hospital of Michigan which offers the state’s only verified pediatric burn center exclusively dedicated to the needs of children. “Because we live in Saginaw, and my kids have not had to deal with any major medical issues, we were not as familiar with the out of area hospitals, but it felt comforting to know that we were told by many people that the Children’s Hospital of Michigan was the hospital that Brandon and Ryan needed to be for the best treatment possible.”

Last year at the Children’s Hospital of Michigan, nearly 500 children were treated and admitted for burn injuries. As a verified pediatric burn center, the Children’s Hospital of Michigan offers a spectrum of quality care from the pre-hospital phase through the rehabilitation process. According to Christina Shanti, MD, director, Children’s Hospital of Michigan Burn Center, who oversaw the care for Brandon and Ryan, caring for burn patients is a challenging process that requires the expertise of multiple disciplines. “The boys had a great attitude from the start. With their family support and dedicated burn care they healed and recovered quickly. They never missed their appointments after discharge and followed their burn rehabilitation schedule as planned. They worked hard and as a result had an excellent outcome.”

Jennifer agrees that both Brandon and Ryan are doing remarkably well. They were in the hospital for more than one month and require follow up care, but were able to start the school year in the Fall of that year and are enjoying all of the normal things that boys do at their age.

“You never know how you are going to handle such an unexpected tragedy but I knew that I had to stay strong for my kids. When they saw me staying strong, I think it helped them realize that they would be o.k.”