By all accounts, Carden of Oakland County, was a typical baby boy. His mom Danniqua had a normal delivery and Carden was growing into a healthy active child. When Carden was around 10-months-old, Danniqua and Carden’s father Antwuan became concerned when Carden was not acting like his normal self.

“He wouldn’t take his bottle and didn’t want to play. He just wanted to sleep,” Danniqua says.

Doctors at the local hospital suggested Carden may have an ear infection. Carden, however, was not getting better and he was having a hard time breathing. Further testing showed Carden had fluid in his lungs. He also had a seizure.

Carden’s pediatrican told Danniqua she needed to take Carden to the Children’s Hospital of Michigan. Danniqua, who was 8 months pregnant with her third child, was not prepared for the news that would come next.

“Doctors at Children’s Hospital of Michigan told me Carden was very sick and he was going into heart failure and liver failure,” she says.

Carden had developed myocarditis, a condition where the muscular walls of the heart become inflamed, typically causing poor heart function. Although there are many causes of the disease including medications and autimmune diseases, in most children, myocarditis is triggered by an infection, usually viral, involving the heart.

Jennifer Blake, M.D., cardiologist on staff at Children’s Hospital of Michigan, says it appears Carden developed the disease from a viral infection.

“Myocarditis is an inflammation of the heart muscle. In children, this is usually due to a viral infection such as the virus that causes the flu or the common cold. As the body's immune system tries to fight the infection in the blood stream, it can be too aggressive and also damage heart muscle. Some children can have myocarditis and have a full recovery of their heart function while other children become sicker despite medications to help the heart function. If medicines are not enough to help the heart to do its job, some children may need to be evaluated and listed for a heart transplant as was the case with Carden,” she says.

Despite the devastating news, Danniqua says she felt confident that Carden was in the right hands.

“I was losing it and would not stop crying. But I also appreciated the care and how open and honest the staff was with me to help us get through this,” Danniqua says.

While Carden was waiting for a heart to become available, he required mechanical support to survive. He was put on a heart machine called extracorporeal membrane oxygenation (ECMO), which is similar to a heart-lung bypass used during open-heart surgery. The ECMO machine removes blood from the patient and pumps the blood through an artificial lung that takes over some of the work of the patient's heart and lungs.

Individuals normally cannot survive more than two weeks on ECMO so buying time is of the essence for many patients like Carden until a heart becomes available.

A device approved by the Food and Drug Administration (FDA) called the Berlin Heart, a ventricular assist specifically for pediatric patients, has provided a lifeline for patients like Carden, which makes it possible to survive while a heart becomes available.

"The Berlin Heart was absolutely essential to keep Carden alive while he was awaiting transplantation. The Berlin Heart works along with the patient's own heart to pump blood and these devices can help keep patients alive for months while waiting for a heart to become available," says Ralph Delius, M.D, vice chief, Cardiovascular Surgery, Children's Hospital of Michigan. 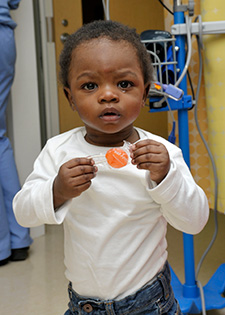 Danniqua had just delivered her third boy and the day before her birthday, the news came that a heart was available for Carden.

“It was the best birthday present I ever had,” Danniqua says.

Carden underwent the heart transplant on July 31, 2015 and the transplant was a success.

“Carden did spectacularly well after his transplant. Three and a half weeks later he was finally home, safe and sound! He continues to do very well. Carden is a very cute and happy child, and he is a complete joy to his family,” says Dr. Delius.

“We are so thankful to the entire staff at Children’s Hospital of Michigan. Despite the devastating news, they made us feel comfortable and confident they were doing everything they could do for Carden,” says Danniqua.

She is also happy to report that Carden is back to his old ways. He has a lot of energy and is walking, playing and loves to keep up with his older brother.

For further information on organ donation visit Gift of Life