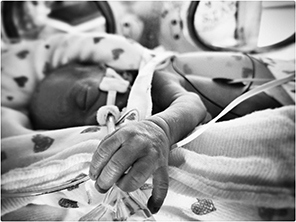 At 23 weeks into her pregnancy, Raluca and her husband Dan of Rochester, Michigan were your typically happy couple anticipating the birth of their first born son Flaviu. An ultrasound at their local hospital, however, revealed the distressing news that the baby was not growing at a normal rate.

Raluca was hospitalized while doctors ran tests. It was discovered that she had intrauterine growth restriction (IUGR), or poor growth of the fetus caused by a lack of adequate oxygen supply from the placenta.

“It was very stressful. I did not have problems early on and did not even know this would be possible,” she says.

Raluca developed pre-eclampsia with H.E.L.L.P syndrome - a life-threatening pregnancy complication usually considered to be a variant or complication of pre-eclampsia. The doctors decided that the best course of action was to deliver Flaviu prematurely, one day shy of 27 weeks gestation. Flaviu weighed just over one pound. 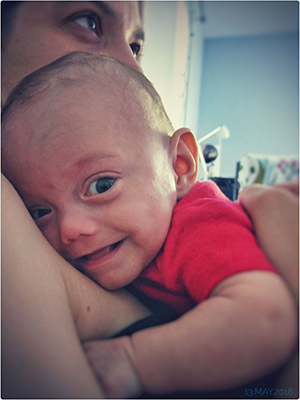 “The doctor told me despite his premature delivery he was initially doing o.k. and that we would be going through a honeymoon phase before treatment would be needed for him,” Raluca says.

After about one week, the local doctors suggested Flaviu be transferred to the Neonatal Intensive Care Unit at the Children’s Hospital of Michigan, part of the Detroit Medical Center.

He also had patent ductus arteriosus (PDA), a heart problem when abnormal blood flow occurs between two of the major arteries connected to the heart by a blood vessel called the ductus arteriosus. The blood vessel is supposed to close after birth as part of the normal changes occurring in the baby's circulation.

In some babies, however, the ductus arteriosus remains open and can put strain on the heart and increase blood pressure in the lung arteries. The condition is more common among premature infants and can be life-threatening in and of itself, or cause other life threatening damage to organs.

Treatment for PDA can include surgery but due to his premature condition and his high breathing requirements on the ventilator, Flaviu was not a candidate for surgery.

Fortunately, Flaviu was able to participate in a non-surgical study procedure to treat PDA.  Children’s Hospital of Michigan is one of nine centers in the United States participating in the study.

Raluca and Dan were relieved that Flaviu may be a candidate for a non-surgical option to treat PDA, but Flaviu had to be weaned off the nitric oxide before he could have the procedure done.

“We were really afraid that Flaviu was not going to make it,” says Raluca. “He was so tiny and not stable. We are so appreciative of Dr. Melissa February and the neonatal team at Children’s Hospital of Michigan. Dr. February encouraged us to have hope and that she would do everything possible to wean Flaviu off the nitric oxide in order for him to have the PDA closure procedure done, and she did,” says Raluca.

Flaviu was now set to have the non-surgical procedure to treat PDA. The procedure was performed by Thomas Forbes, M.D., pediatric cardiologist at the Children’s Hospital of Michigan.

Dr. Forbes says the procedure is done through a vein in the leg and with very small catheters.  The PDA is closed with a device that is made of a special metal called Nitinol.

“The procedure is less invasive than surgery, which requires the chest to be opened and the left lung to be temporarily collapsed to obtain access to the PDA for it to be closed. In patients that are on extremely high support for breathing, they will likely not tolerate the surgical procedure of collapsing the left lung,” says Dr. Forbes.

Raluca is happy to report that given that Flaviu was born weighing just over one pound, he is doing amazingly well. He continues to follow up with his appointments at the  Pulmonary Hypertension Center as well as developmental assessment for prematurity at Children’s Hospital of Michigan.

“Flaviu is a happy boy who is smiling, laughing and enjoying looking at baby toys. I’d like to thank everyone at the Children’s Hospital of Michigan for the wonderful and caring treatment of my son and the constant encouragement we received all along the way,” she says.