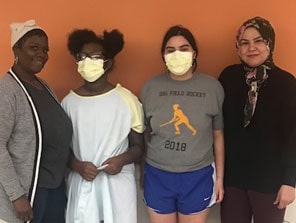 They may have lived miles apart and under normal circumstances would not have crossed paths. But Zahraa of Dearborn and Asiah of Detroit, developed a lasting bond when both found themselves at the Children’s Hospital of Michigan waiting for a life-saving heart transplant.

Zahraa, a 14-year-old girl, developed acid reflux as a baby according to her mom Hana and developed what appeared to be asthma that was never controlled. In January of 2019, her heart was racing and she had shortness of breath. Doctors told her she should go to the Children’s Hospital of Michigan at the Detroit Medical Center after an x-ray revealed she had an enlarged heart.

Hana promptly took her daughter to Children’s Hospital of Michigan where an emergency room physician patiently listened to her symptoms, ran some tests and discovered that Zahraa had a life-threatening heart condition.

“The ER doctor told me Zahraa had heart failure not asthma.  I was in shock since all these years we were told she had asthma. I will forever be grateful for this doctor at Children’s Hospital of Michigan who correctly diagnosed Zahraa after all these years,” says Hana.

Hana’s world was torn apart as she talked to several medical staff from Children’s Hospital of Michigan about her daughter’s condition. She was diagnosed with dilated cardiomyopathy and would require a heart transplant.

As Hana and Zahraa were preparing for this life altering situation, a heart became available soon after she was placed on the transplant list and she received her heart transplant on Valentine’s Day of 2019.

Zahraa noticed a girl on the unit that was about her age and began talking to Asiah, another teen who had previously required the placement of a ventricular assist device to help her weak heart pump blood to the body.  Because Asiah was also on the transplant list, the two teens developed a friendship forged by the similar life-threatening situations they both faced.

“It was terrific to see how close these two teens from different backgrounds came together to support and encourage each other during tough times.  And to think that they will likely be bound by this close friendship for many years is wonderful,” says Henry Walters MD, chief of Cardiovascular Surgery at Children’s Hospital of Michigan.

“When Zahraa was transplanted first she mentioned to me that she felt concerned that maybe she took a heart that Asiah was supposed to have.   Dr. Jennifer Blake, cardiologist at the Children’s Hospital of Michigan was wonderful in explaining to Zahraa that when it’s time for Asiah to get a heart it will come,” says Hana.

In fact, Asiah received a heart transplant 8 days after Zahraa.

Like Zahraa, Asiah also had what appeared to be asthma symptoms for many years according to her mom LaSonia.

“She had a hard time breathing which affected her ability to play sports,” says LaSonia.

Asiah was seen by a team of doctors at the Children’s Hospital of Michigan who determined that Asiah, like, Zahraa had dilated cardiomyopathy.

Dr. Blake says patients with heart failure can have shortness of breath, wheezing, increasing difficulties with participating in activities, and difficulty laying down flat to sleep. Sometimes, these symptoms can be mistaken for the more common condition of asthma.

“The heart conditions that Zahraa and Asiah both had are not common, and at the time of their diagnosis, they were both having worsening of their breathing difficulties despite taking and being prescribed appropriate medications for asthma. This fact was the first clue that led to the correct diagnosis for both girls. Zahraa and Asiah are both intelligent and sweet young women, and it has been a pleasure getting to know them both and see them become friends throughout this process,” says Dr. Blake.

LaSonia was shocked at her daughter’s diagnosis since she was never told Asiah had a heart condition at other hospitals. But it did make some sense since her father had a family history of heart issues.

“We had no choice but to deal with this overwhelming news, but our belief in God and the exceptional service and care of the entire staff at Children’s Hospital of Michigan from the housekeeping staff to the nurses and doctors including Dr. John Dentel, Dr. Henry Walters and Dr. Jennifer Blake pulled us through. We feel so fortunate that Asiah had the life-saving heart transplant at Children’s Hospital of Michigan. The treatment and care from the entire team was simply unmatched,” she adds. 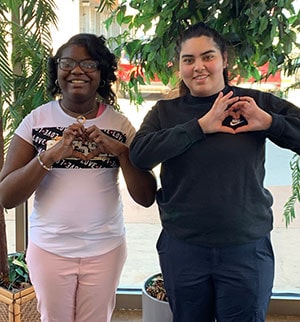 John Dentel, MD, cardiovascular and heart transplant surgeon at the Children’s Hospital of Michigan, says it always amazes him when an uncertain situation with patients becomes bright and beautiful.

“Zahraa and Asiah have forged an unbreakable bond for having gone through this experience; they are both stronger for it.   I consider it an honor to be part of the team that transplanted their hearts,” he says.

Out of this very serious situation, LaSonia found comfort in making a friend with Hana who are both single moms, have a strong faith and grateful that their daughters have formed such a special bond. To celebrate their new friendship, life-saving heart transplant and special bond, Zahraa gave Asiah a matching necklace that has their names and the day they were transplanted.

“I am also planning to volunteer in the heart unit to help other families who may have similar situations and let them know there is hope for their child” says LaSonia.

Hana says she would not wish this on anyone but is so thankful that her daughter was properly diagnosed at the Children’s Hospital of Michigan.

“I want to thank the entire staff from the security guards to the heart transplant nurses and doctors including Dr. Blake, Dr. Dentel, and Dr. Walters who saved my daughter’s life. I pray for them everyday. We also wrote a letter to the donor family and hope to meet them one day to give our thanks,” she says.

Hana also has words of advice for other parents who have children that may not be responding to treatment.

“My daughter was told for years that she had asthma.  If others have symptoms of shortness of breath please consider seeing if there are heart issues.  Fortunately my child has a new chance at life but I want to raise awareness to seek other opinions if treatment is not working,” she says.