Skip to main content and our Accessibility Statement may be found in the footer of our website.
Back To ENT Stories

Specialists get the job done, after a baby comes in with rare, life-threatening airway problem

Routine and normal is how Victoria Johnson of West Bloomfield would describe her second pregnancy. But when her baby girl Summer was born July 6, 2011, what followed was a combination of abnormalities so rare that there was no reference to it in medical literature. 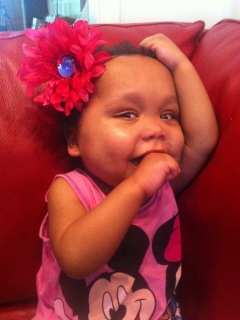 Summer was born at a local hospital and looked completely normal when she was born according to Victoria. "When she was first born she did not need breathing assistance initially, which is pretty miraculous when we later discovered the series of congenital defects she had." Soon after birth, Summer was not able to clear her throat and it appeared she was having problems breathing. After being taken to the special care nursery for observation, the cause of her breathing problems was still not clear.

"I decided we needed to take Summer to a hospital with specialists in pediatric care so we had her transferred to the Children's Hospital of Michigan," says Victoria. A scope procedure was performed at the hospital to look down her throat to help determine what might be causing her coughing and breathing problems. "We expected the procedure was going to take 10 minutes but it took much longer and we knew there might be a serious issue," she says.

Doctors at the Children's Hospital of Michigan determined that Summer had major congenital defects affecting her breathing. Although there have been cases of the individual defects that Summer had, there was no literature that referenced any other child having the combination of defects.

Summer had a Type 4 posterior laryngotracheoesophageal fistula, a rare congenital abnormality which occurs in 1 in 10,000 to 20,000 births. It means there is a gap between the esophagus and trachea, which allows food or fluid to pass into the airway. Type 4 is the most severe cleft extending into the thoracic part of her trachea. The other abnormality doesn't even have an official name according to Victoria, but doctor's described it as a random pocket in her left lung where fluid can collect in the lung and a patient can aspirate, causing pneumonia and other serious issues.

Michael Haupert, DO, Otolaryngologist on staff at the Children's Hospital of Michigan, who managed her care along with a team of specialists on staff including general surgeon, Lydia Donoghue, MD, says Summer's condition was very serious with a 50% mortality rate. "The type 4 cleft she had is the worst connection between the esophagus and trachea possible. She has a separate extra opening in her trachea leading to the other abnormality in the left lung. The type 4 cleft allows food to aspirate into the airway and can cause pneumonia, and allows air to divert into the esophagus and stomach so her breathing is not very effective or efficient," says Dr. Haupert.

He adds that patients with this abnormality frequently have prolonged feeding problems and severe respiratory difficulties. Aspiration pneumonia is common. 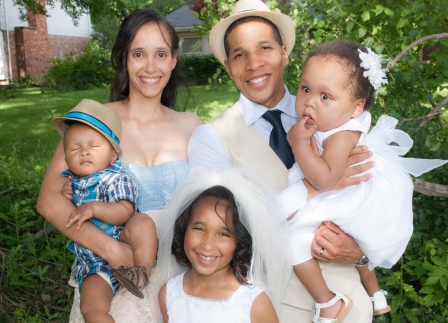 Summer was just 9 days old when she underwent the 11 hour surgery to reconstruct her trachea and esophagus using her own tissue. "Because her trachea is weak and collapses, a tracheostomy tube is needed to help hold it open but with time her trachea should strengthen up enough to support itself and we will be able to get the tracheostomy tube out, although we cannot predict how soon that will happen," says Dr. Haupert.

The surgery was considered successful but complications occurred when Summer had to be put on ECMO, which stands for Extracorporeal Membrane Oxygenation. The machine is similar to a heart-lung bypass used during open-heart surgery. It removes blood from the patient and pumps the blood through an artificial lung that takes over some of the work of the patient's heart and lungs. "She had so much fluid build-up in her body that she weighed 20 pounds," says Victoria. Fortunately diuretics worked and she was able to be removed from the machine.

Summer and her family received a special surprise when she turned 5 months old and was able to be released from the hospital.

At 14 months of age she was taken off of a ventilator and has progressed dramatically since her surgery. Victoria says her daughter is walking, active and only 4-5 months behind developmentally for a child her age. Summer is currently undergoing speech and occupational therapy to help her with speech and feeding, but she is a very happy and bright two-year-old that makes her mother proud. Dr. Haupert says she might need that unnamed abnormality in her left lung removed eventually, but the hope is she will not need any further major reconstructive surgery.

"When I think of the fact that her airway was non existent and doctor's could not even explain how she was initially able to breathe, I am so thankful that she was at a hospital with specialists that were the best of the best which allowed Summer to overcome so many hurdles," says Victoria.

Need a doctor for your child's care?
Request an ENT Specialist Referral