Skip to main content and our Accessibility Statement may be found in the footer of our website.
Back To Gastroenterology Stories 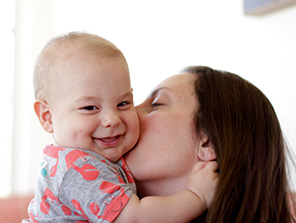 When Melissa, a school teacher from Brighton had her third child Lincoln, life handed her a full plate. Melissa had a normal pregnancy and everything seemed perfect. Lincoln was born in August, which gave Melissa a few weeks to be with her newborn and two children before the start of the new school year.

Melissa and her husband Derek were not too concerned when Lincoln was born with jaundice since their other two children also had the condition when they were born.

Soon after, however, there were signs that caused concern.

“Lincoln was born on a Friday and we went back to our local pediatrician on Monday for testing and she said Lincoln’s liver enzymes were off. She continued to do daily testing and it wasn’t getting better,” says Melissa.

Lincoln’s bowel movements became a neon green color and then a mint green color yet he acted pretty normal for a newborn, according to Melissa.

Coincidentally, Lincoln’s local pediatrician went to a medical conference that showed the color of bowel movements associated with a rare disease called biliary atresia and told Melissa she suspected Lincoln may have this rare condition and recommended that he be seen by a pediatric gastroenterologist.

Lincoln was five weeks old when he was evaluated by Kristen Cares, M.D., pediatric gastroenterologist at DMC Children’s Hospital of Michigan. Dr. Cares recommended additional testing to see if the liver was functioning normal.

“Lincoln’s pediatrician very astutely monitored his liver function tests and performed an abdominal ultrasound. His bilirubin levels continued to steadily increase. Reviewing his ultrasound, a gallbladder was not detected. Lincoln's Mom also brought in a stool sample for us that was very pale in color, which is always a very concerning sign for biliary atresia. We had a discussion about biliary atresia during that visit and what the next steps would entail. I requested an imaging study that more accurately detects for biliary atresia termed a HIDA scan. With the help of our wonderful gastroenterology nurses and radiology department, Lincoln had his scan scheduled within a week, which confirmed his biliary atresia,” says Dr. Cares

Prompt attention for diagnosis and treatment is very important according to Dr. Cares because if biliary atresia is not detected by three months of age, the child is at higher risk for liver failure and need for a transplantation. Dr. Cares recommended that surgery be performed to give him the best chance of recovery.

“I’m not sure if I was just numb or in shock but when Dr. Cares told me Lincoln would need surgery, I was pretty calm and didn’t initially process that my tiny infant would need to be cut up and have a life-saving procedure at such a young age,” says Melissa.

Because time was of the essence for Lincoln, his surgeon at the Children’s Hospital of Michigan, Scott Langenburg, M.D., immediately spoke over the phone with Melissa and Derek to explain the recommended surgical procedure and the surgery was promptly performed.

Dr. Langenburg recommended that Lincoln undergo a surgical procedure called Kasai procedure, a surgical method that can help re-establish bile flow from the liver to the intestine by joining the two directly. Surgeons begin the procedure, also called a Roux-en-Y portoenterostomy, by removing the diseased bile ducts outside the liver.

“He did well after the surgery to re-establish bile flow into the intestine. We are pleased that he is in the subset of patients who get their bilirubin levels down to normal and do not have progressive fibrosis of the liver requiring early liver transplantation. Early recognition, early diagnosis, and early surgical treatment are essential in the successful treatment of patients with biliary atresia. Lincoln's pediatrician and Dr. Cares should be commended for their prompt recognition of Lincoln's direct hyperbilirubinemia,” says Dr. Langenburg.

Lincoln was in the hospital for a few days recovering from his life-saving surgery and Melissa reports that so far, he is doing exceptionally well.

“He has had a few reflux issues where he spits up but immediately after the surgery, he started getting his normal color back. He is 10-months-old and is pulling himself up on furniture, crawling and moving on to doing normal big boy things. He is taking several medications and vitamins but has come a really long way. We are very thankful to the incredible nurses and doctors at the Children’s Hospital of Michigan who not only took care of Lincoln but even fed me sometimes and took care of me during this challenging time.”