Skip to main content and our Accessibility Statement may be found in the footer of our website.
Back To Neonatal Stories

Myles is the youngest reported patient to undergo successful epilepsy surgery with a seizure-free and favorable neurological outcome. The procedure was performed by a pediatric neurosurgeon at Children’s Hospital of Michigan.

In 2017, Elisha of Marysville, Michigan gave birth to her third child Myles. It was a normal pregnancy for Elisha and her easiest of all three pregnancies. In a matter of seconds after birth, Elisha and her husband Robert faced a dramatic and unexpected outcome as their baby boy was unresponsive and blue. 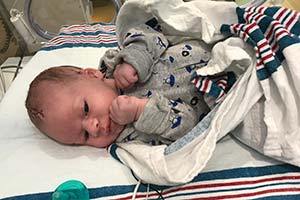 Elisha said local doctors realized Myles was having seizures but were not able to diagnose the cause and immediately suggested he be transferred to the Neonatal Intensive Care Unit (NICU) at Children’s Hospital of Michigan. Robert went with Myles and stayed with him as staff from the NICU ran tests to try to determine what was causing Myles to have continuous seizure episodes. Even after four medications and a medically induced coma the seizures continued.

“We were told he was likely having hundreds of seizures and any one of those seizure clusters could turn out to be fatal,” says Elisha.

Despite the gravity of the situation, Elisha and Robert were relieved to know that Myles was in the hands of a team of expert care.

“As horrible as this situation was, we were so thankful that Myles had the expert care with the NICU and Neurology team. They worked so fast to not waste any time with their treatment and recommendations. Ultimately, the team recommended that surgery would be the best course of treatment. My father and his fiancé are both nurses. They were helpful in explaining each step in Myles' treatment and helped us put more trust into his neurology team since they have experience in the medical field as nurses,” she says.

At just 11 days old, Myles had surgery to remove the area of the brain triggering the seizures.

“The results of brain mapping provided Myles with a path to freedom from seizures and reduction of the risk of permanent body weakness following brain surgery” says Dr. Asano.

Dr. Sood explains that the MRI for Myles showed an abnormality on the brain called cortical dysplasia in the frontal lobe.

“We knew unless the cortical dysplasia was removed the seizures would not stop. At 11 days age and 3.5 Kg weight, tiny Myles was high risk for anesthesia and surgery. After 7 hours of surgery, with excellent anesthesia support, we were able to remove the dysplastic area causing seizures. His EEG became normal and seizures promptly stopped,” he says.

Dr. Sood adds that Myles came off the ventilator and stopped seizing but he was monitored carefully for the first 24 hours in the Pediatric Intensive Care Unit (PICU) for any signs of stroke or blood clot formation.

“There are very few centers in the world where surgery of this type can be performed in children who are under 2 weeks age,” he says. 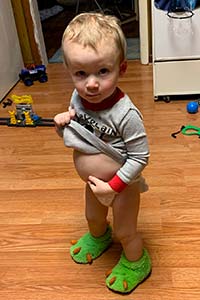 Elisha and Robert say after the surgical treatment Myles has met all his milestones and did not experience complications associated with surgery to stop the seizures. He was able to walk without any delay and continues to impress his specialists with his progress.

At 18 months of age Myles has not experienced any seizures after his surgery and his anti-seizure medications have been reduced from 4 to just one.

“Studies have shown that the overall risk of seizure relapse following epilepsy surgery may reach up to 30%. Since Myles underwent complete removal of the epileptic focus including the underlying brain malformation, I am optimistic that he will continue to be seizure-free. Nonetheless, he should continue to be on one anti-seizure medication for at least 2 years and the decision to wean off the medication should be guided by EEG and ideally should be done gradually,” she says.

Elisha or Robert would not want to relive this experience again but express how grateful their family is for the wonderful support system Myles had including his grandparents, other family members and the support of hospital staff.

“The thought of surgery for my baby who was only 11 days old was so scary, but we are so grateful for the team at Children’s Hospital of Michigan. He would not be where he is today as a happy healthy toddler if it weren’t for the great job they did,” Elisha says.