In April of 2007, Ankita of Troy, a trained dancer in classical Indian dance, was having fun with her friend and sister in her basement, playing the popular Dance Dance Revolution video game. 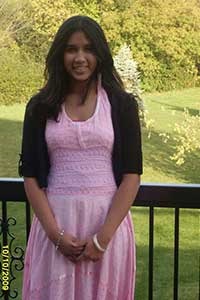 weird and hitting her friend. “When I went downstairs to tell her to knock it off and get ready for bed, I noticed Ankita was definitely not herself. She was not talking or responding and was sweating quite a bit,” said Anu.

Worried as to what was going on, she promptly called 911 so that the ambulance could take her to the local hospital. At the hospital, doctors performed various tests and suggested that Ankita had suffered from a migraine causing temporary paralysis. Not only was Ankita not talking but the right side of her body would not move. Doctors at the local hospital suggested that symptoms should subside within three days.

After one day when Ankita was still not responding or getting better, Anu, a dentist, requested that an MRI be done to determine what was causing the problem. Doctors disclosed that because Ankita had braces, it would interfere with the MRI and would not help in her diagnosis. Being a dentist, Anu immediately arranged to have the braces removed at the hospital so the diagnostic test could be performed.

Three days later doctors told the family that Ankita had suffered an ischemic stroke, caused by an obstruction to the blood supply in her brain. Not satisfied with the lack of improvement in Ankita’s condition, Anu starting consulting other physicians and specialists. “After talking to many people, I knew I needed to go to the Children’s Hospital of Michigan where all the doctors and rehabilitation specialists just focused on children,” she said.

Two weeks later, after being transferred to the Children’s Hospital of Michigan, Anu felt a world of difference in her care. “Ankita immediately felt at ease during diagnostic testing since the staff was completely accustomed to only dealing with children. I was also extremely impressed that a staff of 8-10 doctors from such specialties as hematology, neurosurgery and radiology consulted together on her case and came up with a more definitive diagnosis.

“We were able to determine that Ankita had a dissection of the internal carotid artery, a condition causing separation of the layers of the artery wall supplying oxygen-bearing blood to the head and brain. The condition is extremely rare at such a young age, and the diagnosis is often missed,” says Sandeep Sood, MD, neurosurgeon who treated Ankita and a neighbor of the family.

In addition to her paralysis and inability to talk, she was also extremely sick, possibly caused by medications given at the local hospital. Anu said she was very pleased that after those medications were stopped, Ankita gradually started feeling better.

The stroke had occurred when she was in seventh grade with only six weeks remaining in the school year. Ankita who had routinely excelled in school, taking many advanced level courses had to relearn how to talk, write and walk. Over the next few months, she underwent extensive physical and occupational therapy to help her recover her lost skills.

“It was suggested that Ankita may need to take one year of school off to undergo rehabilitation including physical and occupational therapy. But she was determined to start the school year the next fall and she did,” says Anu. Fortunately, doctors told her age was on her side since younger people tend to recover sooner from a stroke. She also learned how to write with her left hand since her right hand was not functioning at that time. Ankita, a pianist, also took piano lessons at the hospital and a tutor was arranged to help with her cognitive skills.

Today, Ankita, a junior in high school, is progressing extremely well and is able to talk, walk and just made it to the National Honor Society. She is so thankful for her care at the Children’s Hospital of Michigan that she volunteered at the hospital this past summer and plans to do the same, next summer. Madhvi Rajpurkar, MD, division chief of hematology at the Children’s Hospital of Michigan, who treated Ankita with anticoagulant medications, and also a friend of the family, says with great pride that she is a remarkable young woman. “She is one of the bravest young girls I have seen, always smiling and a fabulous dancer. When I watched her in her dance recitals and know what she has gone through and overcome, it brought tears to my eyes.”