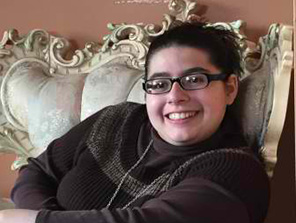 When 22-year-old Dina Fawaz of Dearborn, was about 8-months-old, her parents decided to take her to the eye doctor because it appeared she couldn’t see far away.

Dina’s father, Nazih Fawad said diagnostic tests determined something potentially more serious. “A cyst was discovered on the left side of the brain,” Nazih says.

Treatment was not recommended at that time. Dina would need to go in periodically to see if the cyst was causing any issues.

“Dina did have some issues as she was growing. She had weakness on the right side of her body, she didn’t crawl and was a late walker,” Nazih says.

When Dina was about six-years-old, the family went on a trip to Niagara Falls and Dina slipped to one side. Nazih says she also seemed to freeze for a few seconds.

Dina was taken to a local neurologist and the doctor determined Dina had a seizure. She received anti-seizure medication for several years and would have seizures every two to three months.

By the time Dina was 17-years-old, the seizures started to occur more frequently. In December of 2013, Dina experienced a grand mal seizure caused by abnormal electrical activity throughout the brain.

“This is a parent’s worst nightmare. Her entire body shook uncontrollably and her eyes would roll back. It looked like a scene from a scary movie,” Nazih says.

At the suggestion of the local neurologist, Dina was taken to the Children’s Hospital of Michigan at the Detroit Medical Center. It is home to a world-renowned program to manage and treat epilepsy and seizures.

Dina was seen by a team of physicians on staff including, Sandeep Sood, MD, neurosurgeon, Michigan’s only pediatric neurosurgeon specializing in epilepsy surgery.

It was determined following MRI scanning, that Dina not only had a cyst, but quite likely she had a stroke on the left side of her brain even before she was born.

To confirm if the brain area of the cyst and stroke were causing seizures, she received intracranial monitoring where temporary EEG electrodes are placed inside the skull, directly on the brain, to determine where the seizures are coming from. Brain mapping is also performed to outline areas responsible for critical functions, such as language and control of movement.

Testing confirmed that Dina’s seizures were focused on the entire left side of the brain. Sophisticated imaging with PET scan showed that the left side of the brain had been affected by the stroke and the right side was functioning normally. Testing confirmed that Dina would benefit from a surgery called hemispherectomy. This involves a large incision on the skull to remove the entire damaged left side that was causing seizures.

“Hemispherectomy is procedure that we have performed safely in many patients, nonetheless it is a major undertaking requiring a large incision, blood transfusions, and lengthy post operative recovery,” Dr. Sood says.

He says surgery can be an excellent option for patients who do not respond well to medications.

“We perform about 50 epilepsy surgery procedures a year and have excellent outcomes. About 80-90 percent of patients are seizure free after the treatment,” Dr. Sood says.

The good news for Dina is she was an excellent candidate for a new minimally invasive endoscopic epilepsy surgery procedure developed at the Children’s Hospital of Michigan. The minimally invasive surgery involves the use of an endoscope. The endoscope is a small tube which the surgeon can look through and see immediately inside the brain.

“We had adapted and modified the endoscope over the last five years for surgery on deep brain tumors and effectively used it in resecting tumors,” Dr. Sood says. “It seemed only reasonable to use the endoscope for performing surgery on Dina.”

The minimally invasive procedure worked like a charm according to Nazih.

“She was in the ICU for only one day and has been seizure free for one year. We hope to receive more good news soon. Dina may be weaned off her anti-seizure medication soon. We are very thankful to the staff at the Children’s Hospital of Michigan for everything they did. Dina is more social now and is back to enjoying playing cards,” Nazih says.