Facing many medical challenges including high blood pressure, diabetes and being on dialysis, all while raising two children ages 10 and 18, Taronda Clark of Lincoln Park, was surprised to learn in 2008 that she was pregnant with her third child. “The pregnancy was pretty normal but one day when I was out on Halloween with my son, I started feeling contractions,” she says. The staff at Hutzel Women’s Hospital tried to delay delivery but Taronda’s baby girl Miracle was born prematurely in 2008 at just 24 weeks into her pregnancy. 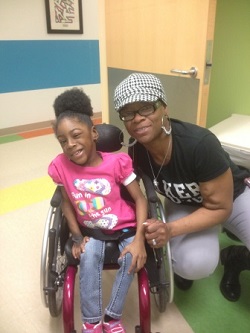 Miracle, who was in the hospital for four months, had several medical complications. She was on a ventilator, had premature lungs and is paralyzed from her waist down. The right side of her body is also weaker than her left side. Despite these challenges Taronda says her daughter, who she named Miracle because the word fit her perfectly, could also have been named unstoppable. “She is kind, astute, loves shopping and is now enjoying going to kindergarten in Taylor where she loves to color and write,” says Taronda.

She has been an inspiration to the staff at the Myelomeningocele Center at Children’s Hospital of Michigan DMC, where she receives comprehensive support and care including physical therapy, occupational therapy, urology care and psychology support to help her with school needs.

Patricia Beierwaltes, nurse practitioner and coordinator of the Myelomeningocele Center, says Taronda and Miracle have both been an inspiration to the staff. “It brings tears to my eyes when I see everything that Miracle has had to overcome as well as the challenges Taronda has faced including receiving a kidney transplant last year.”

In the Fall of 2013, Taronda passed out from low blood sugar, and it was then time for 5 year-old Miracle to show the world the true meaning of her name. “My blood sugar was very high after running around all day and not eating and I tried to control it by eating food. Next thing I know I am lying down with Miracle at bed time and when I woke up, Lincoln Park EMS and the Fire Dept. were in my room trying to revive me,” she says.

Taronda became unconscious due to blood sugar issues and Miracle took her mom’s cell phone, scrolled through the names and called her brother and Aunt to explain her mom was not waking up and needed help. Taronda’s son Joseph Hester Jr. and husband, Joseph Hester Sr. were a few blocks away but could not open the door because they did not have the key. Taronda’s sister La Sonya, a local minister, told her nephew to call 911. “EMS arrived and had to break open a window to get in and take care of me. I am very thankful for the response from EMS and the Fire Dept. At the same time, it’s amazing that Miracle saved my life,” says Taronda.

Although amazed, Taronda is not completely surprised at what Miracle is capable of. “She has medical challenges but I have tried to treat her as any other normal little girl. She’s determined and when she says I can’t, I remind her you can do anything you want to do and be anything you want to be.”

The Myelomeningocele Care Center at the Children's Hospital of Michigan is the only program of its kind in metropolitan Detroit. The center offers a one-stop medical care solution for children with multiple neurosurgical, urologic, orthopedic and rehabilitative health-related issues.