Alicia and Matthew Kruk had two beautiful healthy young boys and were very happy to welcome their third son Remy into the world in September of 2007.

But after just a couple of months after Remy was born, their instincts told them something wasn’t quite right. 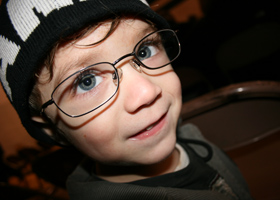 Alicia noticed that he was not making eye contact when she would breastfeed him. He also did not seem to have any core strength to try to pull himself up. He would curl up in a ball and was always crying. "I thought it might be acid reflux but I decided this was not normal. He had episodes when he was curled up when he had a very strange and awful look on his face and looked like he was in a lot of pain,” she recalls.

Alicia, who lives on the border of Michigan and Ohio in Lambertville, Michigan, called the local doctor’s office to move up his routine check up after explaining her concern. Doctors at the local hospital ordered several diagnostic tests. When he was admitted to the local hospital, he was having seizures every 15 minutes.

When Alicia found out the disorder causes tumors in his body including his brain, she wondered if the tumors could be surgically removed to cure the condition. The Kruks were disheartened to hear that the local doctors did not recommend surgery nor offer any potential treatment as a viable option to successfully manage his very serious condition.

Not satisfied with that answer, Alicia went online and researched tuberous sclerosis and found the TS Alliance, an organization dedicated to finding a cure for tuberous sclerosis complex while improving the lives of those affected. Through TS Alliance, it was recommended that Remy see a neurology specialist at the Children’s Hospital of Michigan.

“By the time I had my appointment, I had two pages of questions. I felt immediately at ease when the doctor patiently and thoroughly answered every one of my questions and offered us hope for our son,” says Alicia. The division of Neurosciences (comprised of the neurology and neurosurgery departments) at the Children’s Hospital of Michigan specializes in many complex neurological disorders including epilepsy and tuberous sclerosis complex.

To Alicia and Matthew’s amazement, surgery was a viable option for Remy. Their confidence and hope were raised immediately when it was explained that the hospital performed surgery regularly for TSC. The Department of Neurosurgery is known for remarkable surgical outcomes with epilepsy surgery success rates in the 80- to 90-percent range.

It was recommended that Remy’s case be reviewed by the Children’s Hospital epilepsy surgery board, to assure he receive the best possible treatment. After waiting for the recommendation, the Kruks were thrilled to find out that Remy was an excellent candidate for surgery. The surgical procedures would be performed by a team including, Sandeep Sood, MD, pediatric neurosurgeon at the Children’s Hospital of Michigan. Dr. Sood is the only pediatric epilepsy surgeon in Michigan.

The procedure would entail two surgical procedures. The first involved removing part of Remy’s skull and putting electrodes in the brain to pinpoint what part of the brain is being affected by the seizures. Using advanced neuroimaging technologies, including one of the world’s few pediatric PET (positron emission tomography) centers, neurologists at the Children’s Hospital of Michigan use PET scanning to pinpoint the origin of epileptic seizures.

Surgery, they would come to find out, was critical because the tumors were causing much of the brain to not function appropriately. “At the first surgery we placed a number of small electrodes directly on the surface of the brain to determine the part of the brain tissue involved in tuberous sclerosis and causing seizures,” said Dr Sood. After the first surgery, doctor’s determined that their best course of treatment would be to remove 40% of the right parietal lobe and 40% of the right visual cortex.

“The doctors were essentially recommending that they remove 40% of my baby’s right side of the brain. Yet I could feel their confidence and had strong faith in their expertise. Despite the serious nature of this, the doctors had an amazing calming effect on us. We knew we were in the best place we could possibly be for Remy,” says Alicia.

Alicia and her husband signed the release forms and on June 10, 2008, Remy went in for the 8-10 hour procedure.

Eishi Asano, MD, PhD, medical director of diagnostics was the first doctor the Kruks saw when the surgery was completed. “He was very excited when he came out of the surgery and showed us our son’s brain via a digital camera. He said that during the procedure, tests showed he was having constant seizures. As soon as they removed the part of the brain associated with the seizures, there was no seizure activity.” 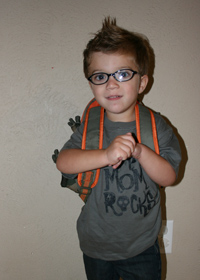 The surgery was considered a success. Remy is now 3 years old and has not had a seizure since. To their amazement, within two weeks of the surgery he was a completely different child, and his personality instantly started coming out. Therapists who first saw Remy shared with Alicia that they were not sure how easily and to what extent Remy’s development would progress. “He went from being completely incapacitated with no hope, to having limitless potential. It has been a long road in his recovery since he had a lot of catching up to do but he now walks, talks and is doing what most 3 year old boys do and enjoy.”

Matthew and Alicia had a difficult but positive journey with their son and suggest that other families do their research to find all possible treatments. “For any other family that is affected by TSC, I would strongly recommend to go online and educate yourself on the disorder and make sure you go to a hospital that is knowledgeable about TSC and specializes in the disease like the Children’s Hospital of Michigan. Even since Remy has been born, new medications are out on the market that can make a big difference. It makes all the difference in the world that we went to the Children’s Hospital of Michigan. “They were familiar with the disorder and offered a life changing treatment for our son.”