Ask a young teenage girl about what she dreams for and you are likely to get many answers, whether it’s going to Disneyland or meeting her favorite teen heartthrob.

For 14-year-old Samantha Horvath of Clinton Township, her dream was something most kids would take for granted; wearing regular underwear. 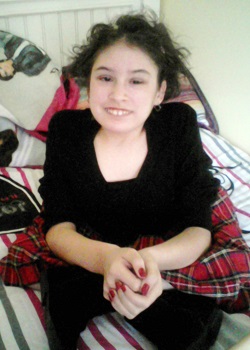 Samantha was born with a severe form of spina bifida in which the spinal cord and nerves develop outside of the body and are contained in a fluid-filled sac that is visible outside of the back area. The condition can cause a number of medical problems including weakness and decreased sensation below the defect. Another problem is hydrocephalus, a condition that causes the fluid inside the brain to build up, causing significant pressure inside the head and the skull bones expand to a larger than normal size. Problems with bowel and bladder function are also common and Samantha has suffered from these problems since birth.

“For years, Samantha has endured neuropathic bowel and bladder, which causes chronic constipation and soiling as well as urinary incontinence. She has needed enemas and intermittent bladder catheterizations her whole life. Because of these problems, she has had to wear diapers up until recently,” says her mom Lisa.

To resolve that problem, Jack S. Elder, MD, urologist on staff, Children's Hospital of Michigan, performed an extensive reconstructive procedure to expand Samantha’s bladder, and create small continent urinary and bowel stomas (openings) through the belly button. The bladder drains by inserting a small catheter through the belly button stoma several times per day. The bowel stoma is used to administer a daily enema through a catheter. The bowel procedure worked well, but unfortunately she continued to leak urine.

“We were able to create a new bladder opening by performing a unique procedure, in which a hydraulic valve is created using approximately three inches of the small intestine, termed a Benchekroun nipple. The technique is used infrequently in the United States, but has been quite successful. The procedure was particularly difficult because of her previous urinary tract and bowel surgery and took seven hours. The great news is that Samantha has been dry and able to wear regular underwear ever since the surgery,” he says.

That simple act, according to Samantha and her mom, has been a dream come true. “You know the joke that you almost pee in your pants with excitement? I was afraid that is what Samantha was going to do, because she was so thrilled to be able to wear regular underwear,” says Lisa with a laugh.

Lisa says despite almost 30 surgeries and countless medical issues, things are looking up for Samantha, an honor student at Warren Woods Middle School. Samantha is also happy to share her story in the hopes that it will help others with a similar condition. “We are so thankful to the entire medical staff, including the myelomeningocele care center. With all of the countless medical procedures and issues, the staff makes you feel like you are never alone in this and continuously help you along the way,” says Lisa.

Now that Samantha’s dream of wearing regular underwear has come true, she wouldn’t mind meeting the Jonas Brothers next.