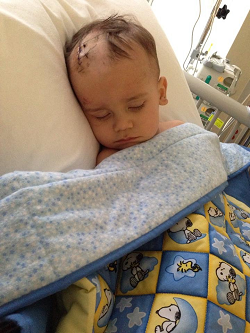 When Erica Hammel of St. Clair Shores, Michigan, received a call from her ex-husband the morning of November, 1, 2013, to let her know that their 1 year-old-son had been taken to the Children’s Hospital of Michigan at the Detroit Medical Center because he was breathing kind of funny, she did not know what to expect but was hopeful it might be something minor like allergies.

What Erica soon learned is a parent’s worse nightmare that she would not wish on her biggest enemy. Erica arrived at the hospital and was told that Wyatt had a massive brain hemorrhage. The cause of the bleeding did not appear to be accidental, and doctors confirmed it was caused by non-accidental trauma, sometimes called "Shaken Baby Syndrome".

“My ex-husband admitted that his then girlfriend was taking care of Wyatt, and that is when I lost it. I knew that my baby had been the victim of abuse,” Erica says.

During this tragedy, Erica says the social worker at the Children’s Hospital of Michigan was amazing and told her something that she will always remember.

“She said, ‘You can’t lose it; you are all Wyatt has, and he needs you more than ever.’”

Erica’s mom had passed away when she was 16-years-old and she feels that experience brought out strength in her that she did not think she had to cope and help Wyatt for what was to come.

During this traumatic time, Erica did not know the extent of Wyatt’s injuries or his prognosis. She just wanted to know if her baby was going to live or die.

Despite the grave situation, Wyatt did survive. He initially underwent brain surgery to treat hemorrhaging.

The neurosurgery team at the Children’s Hospital of Michigan assured her that Wyatt was in the best place possible for treatment.

Steven D. Ham, D.O., chief of Neurosurgery, who helped manage Wyatt’s care, explains Wyatt was on life-support and was in a medically-induced coma involving the administration of medications to decrease the brain’s activity and metabolism in order for it to heal. During this time, the brain pressures are monitored as well as all other body functions. During this time, the patient needs total support for nutrition, fluids, ventilation and other life supportive maneuvers.

“The initial surgery Wyatt required was for drainage of the blood clot and control of brain pressure. Following this, he required additional surgery for placement of a permanent tube to drain the fluid from the brain into the abdominal cavity," Dr. Ham says.

In addition to hemorrhaging, Wyatt was initially blind in both eyes from the trauma, and he could not walk, talk or eat.

“It was like he was back to being a newborn, and he had to relearn everything, including drinking, eating, sitting up and crawling,” Erica says.

Wyatt spent seven weeks in the Inpatient Rehabilitation Unit at the Children’s Hospital of Michigan where a team of occupational, physical and speech therapists worked with Wyatt to help him on his road to recovery.

The great news, according to Erica, is Wyatt has made remarkable progress. He now has vision in his right eye. John Roarty, M.D., chief of Ophthalmology, was able to perform surgery on Wyatt’s left eye which was turned inward because of the trauma. Even though he cannot see from his left eye it, is now normal in appearance.

“Wyatt had significant bleeding in each eye that has healed. We are still hopeful for more vision in the left eye with patching and eye drops,” Dr. Roarty says.

Despite the major trauma Wyatt has sustained, Erica says she has been told by many people that Wyatt’s recovery is a miracle.

“Thanks to the amazing team at Children’s Hospital of Michigan, Wyatt has indeed made amazing progress. He can see from one eye, he can walk and even run a little with his braces, drinks from a straw and even ate a goldfish cracker which we thought would not be possible,” Erica says. 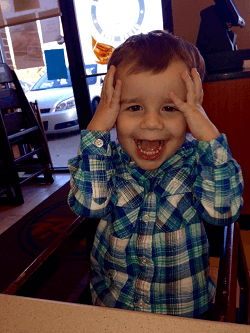 This tragic situation has also encouraged Erica to initiate Wyatt’s Law, a package of three bills in the state House of Representatives that would create a searchable online child-abuse registry in Michigan so anyone who has been convicted of hurting a child would be visible. It would be the nation's first such registry.

Erica did not trust her ex-husband’s girlfriend, who pleaded no contest to second-degree child abuse and was sentenced to up to 10 years in prison. But she couldn’t find anything about her on the Internet when she searched. Erica said had she known about the girlfriend’s prior convictions, she would have had visitation with her son’s father changed.

Erica has had more than 21,000 people from all of the country sign an online petition in support of the law. The proposed registry would be searchable by name, similar to the state's sex offender registry. The Michigan Department of Human Services already keeps a central registry of people investigated for child abuse or neglect, but that registry is not accessible by the public.

“I am trying to turn this tragic situation with my son into something positive in the hopes that a law will be created that can prevent child abuse in the future. My dream is that the law will be enacted not only in Michigan but it will become a national law,” Erica says.