Skip to main content and our Accessibility Statement may be found in the footer of our website.
Back To Orthopedic Stories

Macomb Teen Back to Dancing and Softball After Scoliosis Surgery

Katherine of Macomb, Michigan, never felt any pain in her back when she went for her annual physical in 2017. So it was surprising for her mother Theresa that her pediatrician suggested she be seen by an orthopedic specialist for curvature in her spine. 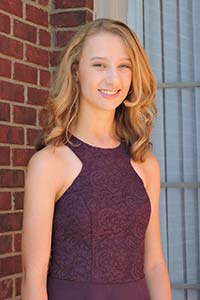 The family decided that Katherine, who is 15-years-old, should be seen by a pediatric expert who specializes in scoliosis. She was evaluated by Ahmed Bazzi, DO, orthopedic surgeon at the Children’s Hospital of Michigan, part of the Detroit Medical Center.

After a thorough evaluation, it was determined that Katherine had a condition called adolescent idiopathic scoliosis,an abnormal curvature of the spine that appears in late childhood or adolescence. Those affected by scoliosis have a side-to-side curve in the spine that can look like an "S" or a "C." Katherine had a severe curve of more than 50 degrees that would require surgical treatment.

“We were shocked that she would need surgery but we were very comfortable with Dr. Bazzi as her surgeon. He was very thorough in explaining what the procedure would entail and was able to accommodate our request to have the surgery scheduled in the summer when Katherine was out of school,” says Theresa.

The surgery was a bit worrisome for the family since Katherine was scheduled to start high school in the beginning of August and they were not sure when she would be able to return to her normal activities.

Dr. Bazzi determined that Katherine required a posterior spinal fusion to correct her spinal curvature by straightening and derotating the curve to bring it back to harmonious alignment. Bracing would have been an excellent option if her curve was manageable in the 25-40 degree range but her curvature was more significant.

Theresa recalls the surgery took about six hours but it felt like 400 hours at the time.

She said the family was anxious during the procedure but so happy when she came out of the surgery and did pretty well. 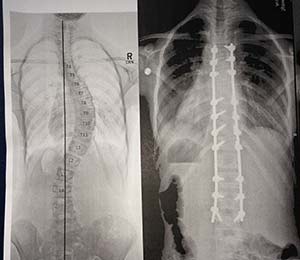 Katherine’s spine before and after surgery“Katherine was a champ! At the young age of 14, she showed a significant amount of maturity and determination. This in turn contributed to a smooth recovery process in getting up within a day of surgery, and soon after walking the halls, climbing stairs, and weaning off of the pain medications,” says Dr. Bazzi.

“The overall outlook is quite favorable for someone who remains fit, healthy, and back-smart for years to come. First goal of surgery is to correct the deformity. Second goal is to prevent future progression. In her case, her spinal alignment and posture remains perfect 1 year and a half later,” he adds.

Katherine, who also had a friend that had a similar surgery, decided to raise awareness of the disorder by developing a website for a school project on scoliosis.

“Even though I had to spend some time recovering from the surgery, I am back to dancing, playing softball and don’t even have to use a backpack with wheels. This experience has taught me to be patient. I wanted to get back to doing normal things soon after surgery but knew that I needed to take time for my body to heal. After my one year checkup, Dr. Bazzi asked me if I’m ready to go to Cedar Point. I haven’t gone yet, but I’d like to one day soon,” says Katherine.

To read more about Katherine’s journey with scoliosis and her surgery visit her website at https://my-scoliosis-story.weebly.com/. For further information visit Orthopedics at the Children’s Hospital of Michigan or request an appointment.

Thank You. One of our representatives will contact you.

Need a doctor for your child's care?
Request an Orthopedic Specialist Referral