There are times in the medical profession when a patient defies all odds and the outcome surprises everyone. Meet Fatima Atwi of Dearborn. She is one of them. 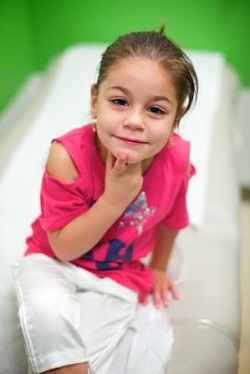 In December 2009, Baraa Atwi gave birth to a to full-term baby girl. For the first three weeks, Fatima appeared to be healthy. But during her fourth week, she developed severe diarrhea. After several days, the Atwi family sought medical care for Fatima at a local hospital. Seeing the severity of her diarrhea and dehydration, doctors at the local hospital transferred Fatima to the Emergency Department at the Children’s Hospital of Michigan, part of the Detroit Medical Center.

Fatima was admitted to the hospital for tests, but the cause of her gastroenteritis was not immediately apparent. After several days in the hospital she deteriorated and had a cardiac arrest. Nurses and doctors trained in pediatric advanced life support (PALS) were at her bedside and performed cardiopulmonary resuscitation to keep the one-month-old infant alive. Abdominal X-rays soon revealed she had a severe infection in her intestines.

Due to swelling in her abdomen, it was difficult to keep her properly ventilated. The team of doctors treating her decided to surgically open her abdomen to relieve internal pressure and facilitate proper ventilation. This would also give them an opportunity to further investigate the bowel infection.

Michael D. Klein, M.D., F.A.C.S., F.A.A.P., Arvin I. Philippart endowed chair of Pediatric Surgical Research on staff at Children’s Hospital of Michigan, performed abdominal surgery on Fatima and quickly discovered that nearly all of her intestine had lost its blood supply. Not knowing what parts of her intestine were still viable, if any, Dr. Klein covered the abdominal wall with a sterile silastic bag to decompress the abdomen, to allow better ventilation and improve blood flow to the bowel.

“I explained to the family that most of her intestines were severely ischemic (lacking in blood flow), and that it was very unlikely that any of them could survive. If we were to remove all the questionable bowel now, we would probably take out some that could survive. Therefore we would relieve the abdominal pressure by using the silastic bag, but not remove any intestine at this time,” says Dr. Klein.

During the days and weeks that followed, Fatima became very ill. Viewed through the clear silastic bag, her bowel started turning black and dying, actually coming off in pieces. Soon it became increasingly difficult to ventilate her. Dr. Klein and the other pediatric gastrointestinal and pediatric surgical experts involved in her care agreed that the best course of action would be to simply close the abdomen and wait. There was very little anyone could do for her.

“We knew the situation was very serious but we would not give up on Fatima,” says Rana Atwi, Fatima’s aunt.

The family relied on their faith during this time, praying for Fatima’s recovery.

“Even though we were told there was not even a one percent chance of survival we decided not to take her off the ventilator,” adds Rana.

Fatima’s grandmother in Lebanon sent a towel dipped in the springs/fountain of a blessed shrine and they laid it on Fatima's abdomen as they prayed. Weeks passed, but instead of getting sicker as everyone expected, this remarkable baby started getting better.

“We received a call from Dr. Klein during this time and we braced ourselves for the news that Fatima had passed away, but instead Dr. Klein said I have some very surprising good news,” says Rana.

“Fatima’s overall health had improved so much, that we thought it would be wise to reoperate to remove the intestine that had died and to put together the pieces that might still be alive,” says Dr. Klein.

By April 2010, three months after her first surgery, Dr. Klein brought her back to the operating room and found that almost all of her large intestine was gone and 75 to 85 percent of her small intestine was gone. Still, she seemed to have stabilized and was tolerating IV nutrition quite well. He found a very small portion of the small intestine that was viable and connected it directly to the infant’s rectum.

During the following months and years, the baby became one of the hospital’s first patients treated in its new Children’s Hospital Intestinal Rehabilitation Program Clinic (CHIRP).

In January, 2014, after four years of home treatment and a gradual introduction of oral nutrition, she had her central catheter line removed and began getting all of her nutritional requirements through a special diet of table food, liquid vitamin supplements and elemental liquid nutrition. She received other essential vitamins, like B12, through subcutaneous injections.

Physicians on staff at the Children’s Hospital Intestinal Rehabilitation Clinic continue to monitor her closely, seeing her about once every two to three months to make sure she is gaining weight and developing appropriately.

Rana says she and her family are very appreciative of the care Fatima received and so happy that Fatima is doing well.

“We are so thankful to the doctors, nurses and staff at Children’s Hospital of Michigan. We knew the situation was life-threatening but in the end she surprised us all and survived. She is a happy girl that is going to school, riding her bike and even swims. For other families that are facing a serious situation like this we would like to say never give up.”