Whether it’s enjoying riding her bike, painting nails or playing the Wii, in some ways you could argue, De’Janai of Southfield is your typical happy golucky little girl. But after experiencing a series of life threatening events in a short two-year period, many who have come to know De’Janai will tell you this little girl is anything but typical on so many levels. 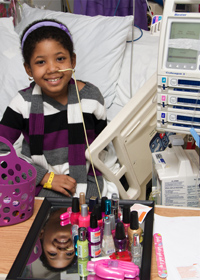 In 2008, De’Janai was at gymnastics class complaining that her left arm was hurting. Unable to move her arm, her mother, De’Ashia Taylor took her to a local emergency room. De’Ashia was told that De’Janai had a fractured arm but it was not a normal fracture. An X-ray at another hospital showed that De’Janai had a 95 percent chance of having a tumor in her arm.

“I could not believe it,” recalls De’Ashia who was pregnant with her second child. “I came into the hospital thinking she just hurt her arm tumbling in gymnastics and we find out she may have cancer?”

After a series of tests, doctor's confirmed at DMC Children’s Hospital of Michigan that De’Janai had Osteosarcoma, a type of bone cancer usually affecting the arms or legs. After several months of treatment including chemotherapy and surgery, De’Janai and her family were happy the treatment was done and hopeful that the cancer was successfully treated.

But after about one week, De’Janai developed a high fever and was taken to the emergency room and rushed to the Intensive Care Unit. Her condition initially seemed to improve but a couple of days after being admitted to the hospital, while she was playing UNO, she had a seizure and her heart stopped.

Doctor's at Children’s Hospital gave her CPR and were able to save her but she experienced two more seizures. Her heart was very weak and was only functioning at approximately 8%. Tests also confirmed she had the H1N1 virus. De'Janai was put on a heart machine called extracorporeal membrane oxygenation (ECMO), which is similar to a heart-lung bypass used during open-heart surgery. The ECMO machine removes blood from the patient and pumps the blood through an artificial lung that takes over some of the work of the patient's heart and lungs.

Doctor's determined that De’Janai would need a heart transplant and she was put at the top of the priority list. While she was waiting for a heart transplant, she was put on a Berlin Heart, a mechanical pump that takes over the function of the damaged pumping chamber of the heart and restores normal blood flow.

Despite the grave medical situation that De’Janai was experiencing, her mom said that it didn’t deter her from having fun. “I was told from the staff that they did not know of any other child who would play Wii games and set up a daily nail salon in the hallway of the ICU while on the Berlin Heart,” says De’Ashia. In the words of De’Janai, “if I have to be here, I might as well make the best of it. I’m not just going to sit around and be depressed.” 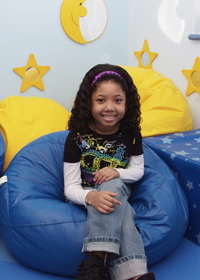 The family received a special gift on April Fool's Day, when a heart became available. De’Janai received a transplant at the Children’s Hospital of Michigan, which offers one of the leading pediatric heart transplant programs in the country.

De’Janai was released from the hospital after just a couple of weeks of having her transplant but during her stay, she won the hearts of numerous medical staff and others who were lucky enough to meet her.

“De’Janai had the ability to bring a smile to anyone’s face despite what she was going through. Whether she was riding her bike around the Pediatric Intensive Care Unit, dancing to her favorite Wii games or painting the finger nails of every staff member she met, De’Janai remained positive and touched the hearts of everyone”, says Andrea Martinovich, RN, pediatric transplant coordinator.

As to her prognosis, Henry L. Walters III, MD, chief of Cardiovascular Surgery says statistics are helpful in certain applications but don’t really mean much when it comes to an individual because you never know how a person will do. “One thing I do know is De’Janai is an exceptional little girl who never failed to capture the heart of those she encountered. I know that her recovery will be no less extraordinary.”